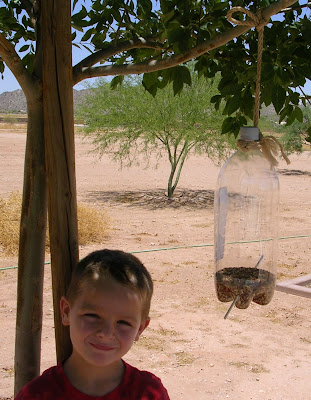 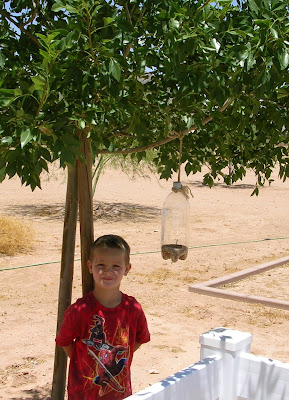 This is a simple nature craft using a plastic bottle, a wooden skewer, twine, and birdseed. The young inventor first removed the label off the bottle using kid safe scissors.

About 3 inches from the bottom of the bottle draw a 3 "x 3" square or an arched topped square on both sides of the bottle using a Sharpie marker. Make sure the openings match up on opposite sides of the bottle. You could give the child a pattern to trace. Cut out the marked sections. I started the opening for my grandchild using a sharp knife. The child then used a pair of kid safe scissors to finish the cutting.

Cut a small "X" one inch below the center of your bottle openings using a sharp knife. (This should be done by an adult) A drill with a small bit could also be used by an adult. Don't make the wholes or "X's" too big, you want the wooden skewer to fit tightly.

Take the bird feeder outdoors. Hang the bird feeder on a sturdy branch in a tree. Placing it where it can be seen from an indoor window is really fun. Fill the bottle/bird feeder to just above the wooden perch with wild birdseed. Now, sit back and watch the birds discover this very special treat!

Interesting note: Three of my granddaughters saw the finished bird feeder hanging in their cousins tree just minutes of him being home with his finished project. I received a frantic phone call that they all wanted to make one too. I was too busy that day but promised we would do the project the next day. They all arrived the next day and were thrilled to create their very own bird feeders. They took them home and hung them in their trees which are right across the street from the cousins feeder they had seen the day before.

The feeders were quickly found by the birds. With the kids watching they discovered that the birds finished the seed from the girls feeders before the one across the street which was the original bird feeder made by my grandson.

My eight year old grandson made the observation that the birds preferred the girls feeders because they were more attractive! Turns out the girls had added decorations to their feeders using colorful Sharpie markers. Regular girls stuff like flowers and hearts. Not science, but a very good observation. Who knew???
Posted by Grandma Shelley at 12:10 PM