A Very Excited Thank You 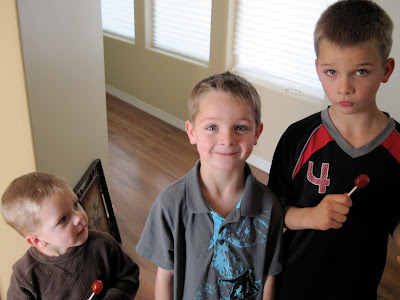 This picture was snapped just minutes after the boys had discovered our Valentine's Heart Attack on their shared bathroom. The Valentine surprise was waiting for them after school. They headed straight down to our house after their discovery to let us know that they had found it and to tell us thank you. With their Valentine's suckers still in hand they grinned with excitement as they described all of the silly places they found hearts.

Their mom tells me that they have used the hearts over and over again. Once to heart attack their little brothers bedroom, another time to decorate the breakfast nook on Valentine's morning where their mommy had made them heart shaped pancakes, and then again later in the formal dining room for their Valentine's dinner.
Posted by Grandma Shelley at 1:01 PM