These three grandsons love corn on the cob. I learned about the depth of their love of corn following a family dinner when a big bowl of left over corn on the cob was set on the island in the kitchen to cool before putting it away in the fridge as leftovers. When the boys discovered the left over corn they climbed up on the bar stools and ate cob after cob with no butter and no salt until it was gone. They weren't fooling around either they were eating the cobs clean!

So, on a recent visit when I had them for dinner I made sure that plenty of corn on the cob was on the menu. 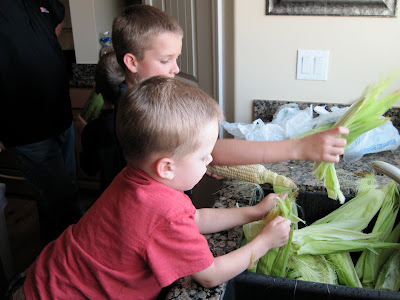 It was a hands on corn feast at Grandma's House from start to finish. 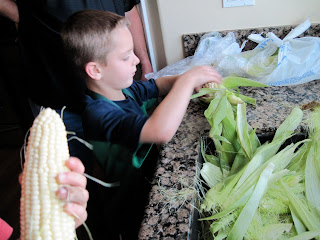 The only thing that would have made our corn feast better
is if I would have had it growing it my own garden where
the boys could have began our feast by harvesting the corn themselves.
The boys worked and worked to get the corn nice and clean.
In the pot it goes. 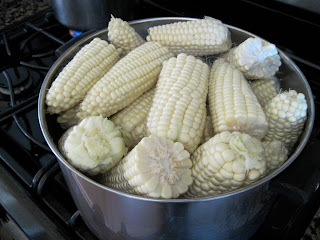 The boys could hardly wait. 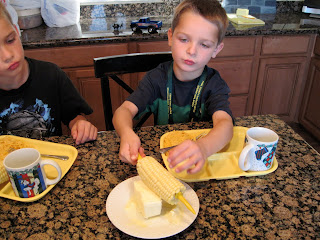 The boys had picked out their own cob handles out of quite
a selection I have gathered over the years.
Digging in! 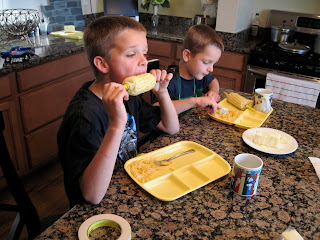 The boys had each chose their own plates and cups
from the grandkids drawer of kitchenware.
My Christmas mugs are stored in the very back of
the very deep drawer.
To make the occasion extra special they each
chose a Christmas mug in July.
The boys feasted until they had their fill.
Mac and Cheese was served as a side dish!
Our Hands on Corn Feast
was fun, very sweet and tasty,
and loved by both grandma and
three very special grandsons!
Posted by Grandma Shelley at 8:35 AM