Birthday Outing to a Working Farm

October brought the 10th and final birthday of our grandchildren for the year 2010. It has been a year long tradition to take our grands ( 5 years and over) on a one on one birthday outing instead of a wrapped gift.

We have been to a play, museums, the movies, and now to a working farm for a pumpkin festival. Each of the outings also included dinner out and a stop for ice cream on the way home. 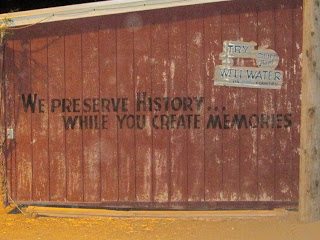 I loved this slogan on the side of an old rustic barn. This was exactly why we were there. To create a birthday memory with our grandson that will be his and ours forever! 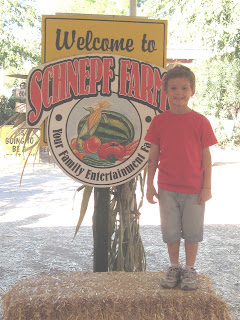 Scnepf Farms in Arizona is a real working farm that hosts family friendly events throughout the year. We were there for the pumpkin festival. Our grandson was very happy that his one on one outing with Papa and I was finally here and he was ready to have some fun. 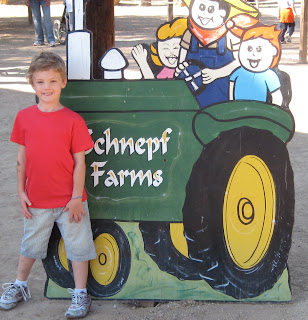 I knew right off that I was going to have a great time capturing this outing on my camera. Some of my grands are camera shy while this one was way ahead of me by requesting that I  take the photo's!
He had read all about and had seen the pics of his cousin's birthday outings on this blog throughout the year. 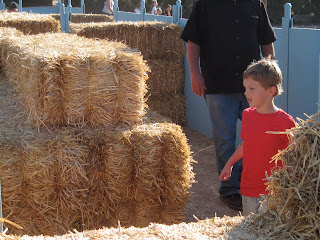 He led his Papa through a straw maze. 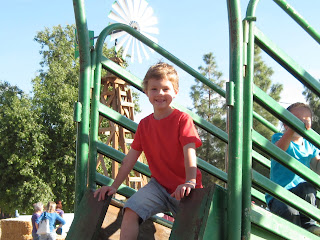 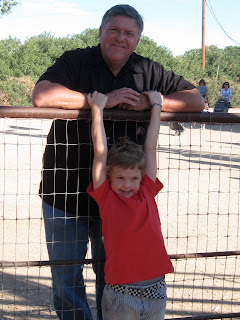 Papa and I shared in every bit of his excitement and learning.
He got up close to goats, sheep, turkeys, pigs, chickens, rabbits, cows, and horses. 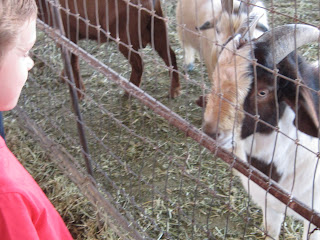 This birthday outing offered lots of time for questions, sharing, and listening to one another. 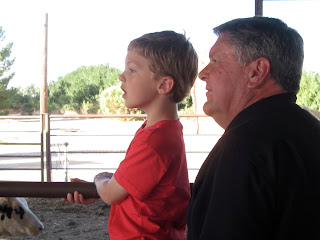 These four seater ride on things were so much fun. You peddled your way through a peach grove race track. I was a bit fearful though. While we were waiting for our turn another Grandma and Papa team had to be rescued by the staff working there. Grandma had to do a walk of shame back to the long line of people waiting their turn and the Papa was peddled back by a staff member.
I am happy to report that although winded and our knees being a bit sore we made it through the course with flying colors and most importantly our grandson was ear to ear smiles through the entire course! 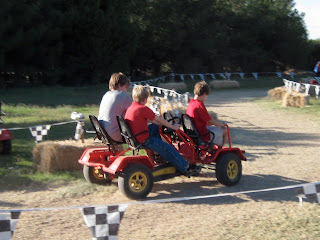 I would love to have one of these for
neighborhood rides with the grands! 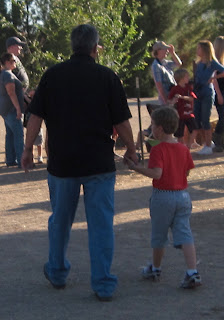 I love seeing Papa and the grands hand in hand! 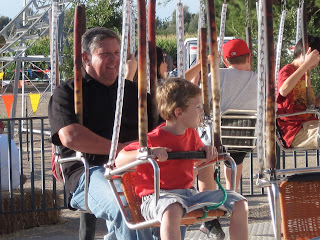 Papa joined him on the swing ride.
Wheeee!
A pre-purchased ticket to Schnef Farms is just $12 each. That includes unlimited rides, and free tennis ball sling shots, shows, hayride, mazes, parking, and more. There is an additional fee to ride the train, to purchase food,  to do a few arts and crafts, pony rides, and to purchase pumpkins if you choose to do so. 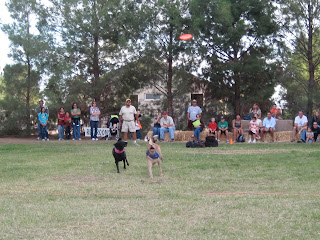 One of the shows was a frisbee dog show
that was amazing and another was pig races. 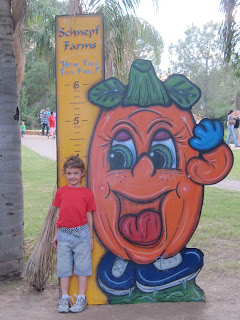 We toured the sites and events at the farm
just like the birthday boy wanted to.
He was  exactly four feet tall and in charge!
We went on the hay ride which stopped at the farm's deer farm so that we could get off for a closer look and we went along the edges of the peach orchard and acres and acres of the corn maze. 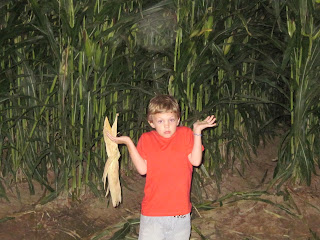 Which way now?
He and I went alone into the corn maze. I don't know that he had any idea that we didn't go very far into the maze. I was afraid I might get us lost. We did stay in there quite a while and we had a great time. We picked up a few ears of corn to dry for some Fall home decor. 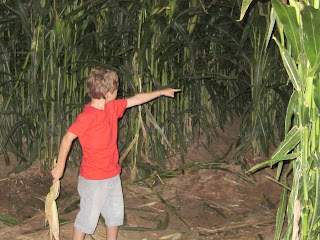 This way Grandma!
Papa was getting worried about us and he called me on my phone. We played a trick on Papa and told him we were lost and that we needed him to come and help us find our way out. I told him we went in and turned left, then right, then two more lefts, and I THINK maybe right again after going straight for maybe 10 or 20 rows of corn. You can probably imagine the helpless sigh I got on the other end of the line. As we were on the phone my grandson and I walked out of the maze to greet Papa! Papa was relieved and our grandson had a good giggle over tricking Papa. 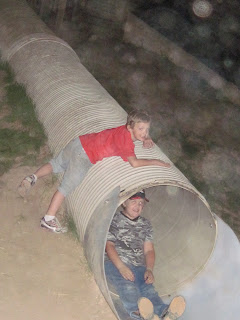 There were two tunnel slides on the farm. He loved this slide which was much shorter than the other one. As soon as he would slide down he would run back up the hill and do it again. He was having a blast and it offered Papa and I a good rest as we sat on a bench near the bottom of the slide.
They have fireworks as part of the event too but we had worn one another out by 9 p.m. and we chose to leave before the 10 p.m. fireworks show. 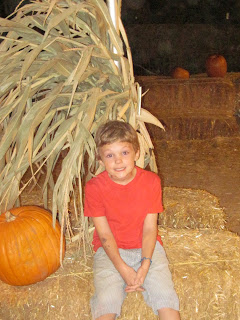 He was still smiling when it was time to go home.
His special time with Grandma and Papa had more birthday fun in store. We stopped for ice cream on the way home and this birthday outing included a sleep over at Grandma and Papa's house.  And, because there were no souvenir shops for kids that we could find on the farm he said that he wanted to go to a dollar store. So, that is exactly what we did on Monday after school. We spent a good hour in the dollar store and he couldn't have been more happy with his "birthday outing souvenir's"
Posted by Grandma Shelley at 8:22 PM