Our Family Ho...Ho...Ho....liday traditions end our family calendar for the year. 2010 was no exception and boy oh boy did we create some memories!

Last winter my husband and I were living in the mountains in a large vacation rental on an extended work assignment. Our entire family came up for an extended stay to kick off our Ho...Ho...Ho...liday schedule of events. We had a week of family holiday togetherness that has been remembered with fondness all year long even by the youngest of the grands who is just two and a half!

We tried to get the same place this year for a Christmas vacation because we all feel a connection with the mountain cabin that our family turned into a shared home for the holidays last year. It was not to be, the owners of the property were using it themselves this year.

Plan B was a little further out and a much larger place that sat on 80+  acres of private mountain property.

Once the location had been secured, work schedules, travel plans, arrival times, meal assignments, and planned activities were all planned and assigned for our party of 20. (10 of which are cousins all 10 years and under)

On departure day NO one would have guessed that we were heading to a fully furnished vacation rental. We filled a 30' box trailer with all of our equipment, toys, snow gear, wares, and my tubs filled with fun activities to help keep the grands busy and having fun during our holiday stay.

My husband and I were driving a big dual cab pick up and pulling the box trailer. Our son in law and his family of six followed close behind. In our truck we had three generations. My mother in law, us, and one of my grandsons whose parents were planning to come up in a couple of days. 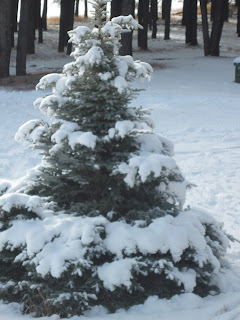 Nightfall had set in before we arrived. Thankfully, our youngest daughter is living in the area and she and her boyfriend had already scouted out the location for us. They met us at the freeway exit and escorted us in. The roads were covered in freshly fallen snow and without their help we would have never found our way on the final snow covered dirt road that winded through an open and very dark meadow that led to the cabin.
To our surprise there were no lights on in or on the cabin. The truck and trailer got stuck in the snow a bit of a distance from the cabin so that became our parking spot for the night. Upon entering the cabin there was no heat turned on for us either. It was freezing! AND, it was a huge area to get warm before bedtime. 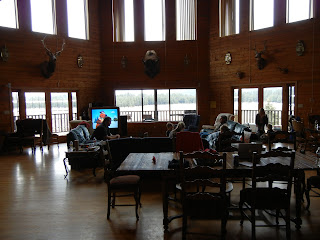 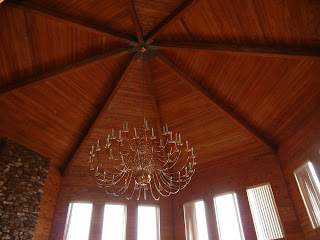 To enter the house you had to either use a flight of stairs in the garage or a flight of stairs off the deck. Hauling in our 30' trailer of necessities was not going to be easy!  Everyone spent a few minutes checking out the 6000+ square feet of cabin space while Papa got the heat and the hot water heater turned on.
There were 6 bedrooms, 5 full baths, a huge game room, probably a 2000 square foot open loft, a massive staircase, floor to ceiling stone fireplace, an enormous kitchen, huge floor to ceiling windows overlooking the open meadow, eating space for at least 22, and a big mud/laundry room that we knew was going to get a lot of use. There were also closets everywhere. The upstairs had kid size doors on closets everywhere. They became favorite hideouts, forts, and more for the cousins!
My daughter's boyfriend had brought one of his buddies along too. They worked and worked to unload the trailer for us. We were so THANKFUL for their help. Because of the road conditions and the late hour our plans for dinner had to be modified.
We had planned to head into town for dinner out once we got settled in. We found ourselves with 13 very hungry tummies to feed. My daughter had planned to do her grocery shopping upon arrival. I thankfully had brought along some groceries.
What could I fix quickly to feed 13...... four of which were some very hungry and hardworking men?
I knew my 5# bag of pancake mix was going to save the day. But, in our 30' of wares no one had brought a griddle and the cabin did not have one. So, one at a time in a skillet I made 9" pancakes!
I heated up some sliced ham, warmed the syrup, pulled out the ice cold milk, flipped pancakes, and smothered them in butter until everyone had their fill.
It ended up being a great time shared in the kitchen. The college boys thought the pancakes might have been the best ever and they shared that they were loving the feeling of family with us!
FYI: It takes forever for a 100 gallon hot water tank to heat ice water into usable water. Dishes had to be saved until morning.
We could not wait for the rest of our family to arrive and to join in the fun. The five grands that were there really wanted their other five cousins to hurry up and get there and I know for sure that the five cousins still at home were just as anxious to arrive!
It felt very good to get into bed that night. Two of the seven year old cousins had the entire upstairs to themselves the first night. At 3:00 a.m. they came to me and told me they couldn't go to sleep. I took them back upstairs and the bedroom had been turned, flipped, and rearranged into a huge fort! They had been far too busy to even think about sleep! The next morning great-grandma who had the bedroom directly under them had her own reasons for not being able to go to sleep!
After some back rubs and having their grandma to snuggle with they quickly drifted off to sleep. Note to self to share with parents: Sending the kids to the loft to sleep was NOT going to work!
Day one was a lot of work but we know as a family...... that such efforts has it's rewards!
Posted by Grandma Shelley at 11:26 AM