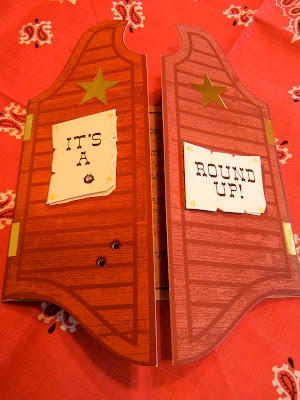 It's a Round Up!
Invitations went out and the excitement built as we counted the days. Not only is the three year old birthday boy a boot lovin' little guy but so is his next door neighbor who also happens to be his four year old cousin and his daily playmate.
This was a big event for a little guys birthday but it was also a day of friends and family coming together  through work and play.

The little cowboy and cowgirl that decorated one of the guests tables was not found in a party store but rather in Lowes. The basket of cowboy hats and bandanna's were given to the little party guests as they arrived. 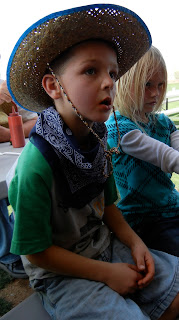 Another Lowe's find was this really cute ceramic cowboy boot. 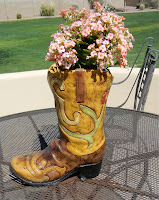 All of the other guests tables had a metal trough as the centerpiece.

Smokers were filled with slabs of BBQ ribs and hot dogs that were
being tended by an award winning BBQ...er and friend. 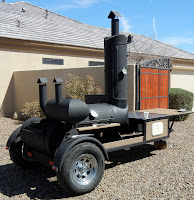 While the adults were drooling over the smoking ribs the kids were enjoying pony rides around the big back yard and their very own petting zoo. (I didn't get any pics of the pony rides!) 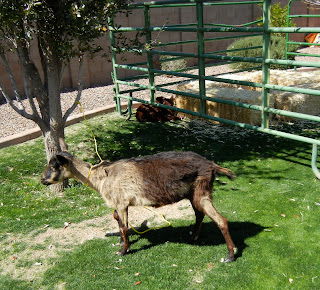 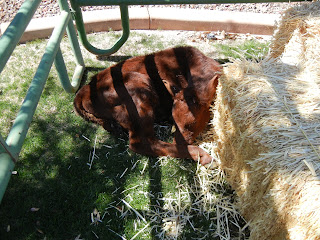 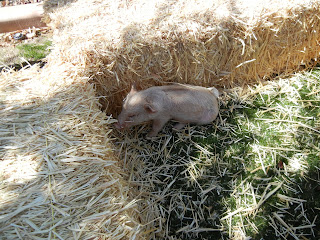 The fencing, straw bales, and the animals
were all on loan from friends.
My daughter learned that she does not want goats. They were constantly chewing their way to freedom and snacking heavily on her plants. 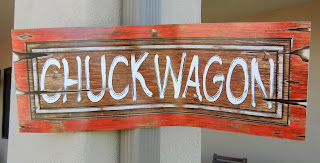 When  it was time to eat the spread was both beautiful and tasty! Ribs, hot dogs, baked beans, potato salad, grapes, and chips filled the plates of all of the guests. There were ice chests filled with cold drinks and a punch bowl that the kids loved serving themselves from. 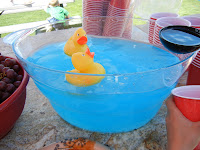 Mmmmmmm's and yum....yum...yums
were heard as the award winning and melt in your mouth ribs were
eaten clean and tossed into the centerpiece troughs. 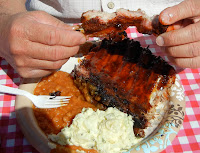 You better believe that this round up included a
whole lotta finger lickin'!
The faces of the kids proved that they too enjoyed the ribs.
Many had ear to ear BBQ sauce!
Party games included a fishing pond, rides in the birthday boys new jeep, and this fun electronic game of target practice. The cans and bottles popped off when the kids hit the target. The bottles in the game also broken in two as they fell off. 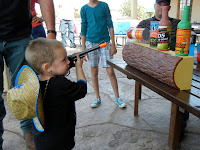 The kids LOVED this game!

The birthday cake was perfect for the occasion.
Tip: My daughter had tried to write happy birthday on the cake using a tube of white icing. A whoops occurred and she fixed the mistake by smearing the white icing around, grinding up some Oreos, and spread them over the icing. It became the perfect spot for the pigs! 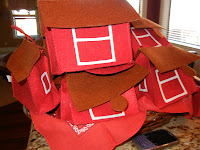 Party favors were these cloth barn totes
filled with farm animals and treats. 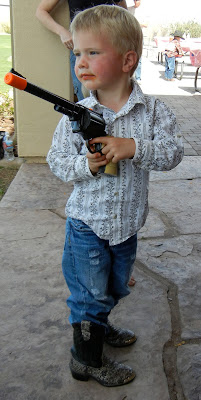 It was a great celebration for this very
special little birthday boy and his guests. 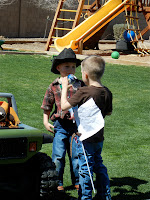 In fact, as the party guests were leaving the birthday boy asked them where they are going? He told them over and over again that it wasn't over yet! He did not want his special day to end.
Family and friends worked together to clean up and put away after this amazing round-up of birthday fun, friends, and family. And the parting gifts for the adults...... large foil pans filled with smoked ribs! It was a delicious and very, very generous surprise!
Posted by Grandma Shelley at 9:57 AM