I have certainly had my doubts about the direction that good customer service has gone over the last few years. Getting a waiter who you don't mind tipping has become few and far between and the "customer is always right"policy seems to have been nearly forgotten. It has become frustrating to have to fight for what should be yours as a customer.

Well, I have to tell you that I have very recently gotten a much needed boost in my down in the dumps attitude on customer service.

The first came in a very small but very profound way. I  had gone to refill my five gallon drinking water bottle. The automated machine took my dollar and gave me no water. It would not spit my dollar back out. I don't know why we do it but I banged the machine thinking I could coax it into behaving. No such luck despite multiple bangs!

There was a toll free number on the machine to call to report any problems.  It was only a dollar but I took advantage of the customer service option. I reported my loss and reported that the machine was not working. The phones were automated so I was not sure what was going to happen next.

In  just a couple of days I received a letter in the mail. 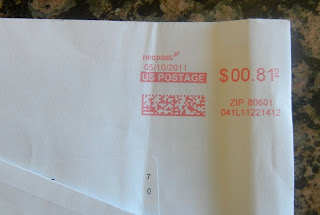 Their slogan read
"Your satisfaction is our top priority" 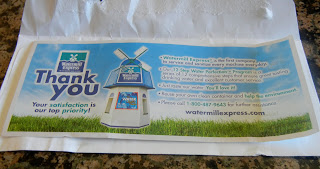 They were not kidding.

This is a company whose product is just .25 a gallon.
They managed my complaint quickly, gave me a 150%
return on my loss, offered an apology, and they paid .81 cents in
postage to keep their customer satisfaction promise.
Way to go Watermill Express!
My second boost in customer service also exceeded my expectations. We recently booked a cruise. When calling the cruise line the sales person told me that we had credit from a past cruise. I later called back to book the cruise and apply the credit. Now the credit had somehow disappeared. I was told that the credit had expired. I ended up booking through a travel agent for a better deal. I later called the cruise line to ask about another issue when another sales person asked about the credit we had due to us. I was told that it did not expire until 2099. I asked to speak to customer service. I addressed the conflicting information on the credit. She then told me that the credit had indeed expired. GRRRR!
The customer service lady kept apologizing to each and every point I made saying that the credit had expired and there was nothing she could do to help me. The reason we had those credits was because of very poor customer service with the cruise line on a cruise we took seven years ago. I told her that after our previous experience we had no plans to ever return to them for our cruise business. I told her how disappointed I was to finally return to give them another shot and how I was now experiencing poor customer service all over again. That statement got her attention and she told me that she was going to go talk to her supervisor. Within moments the credit had been renewed. It was not only renewed but they added on an extra $80 bucks to ensure our customer satisfaction! YEA!!!!!
What is your opinion on today's customer service?
Posted by Grandma Shelley at 7:28 AM