That Could Take an Eye Out!

How many times did we hear our mothers warn us of things that could take an eye out. How many times have we said it as mothers ourselves despite thinking our own mothers warnings were just a tad crazy. Some warnings made a ton of sense while others left us scratching our heads.

My youngest daughter is the mommy to a four legged little girl named Kabella. Kabella is a four year old Border Collie mix that she adopted from a shelter a little over a year ago. When our daughter moved back home to live with us my husband and I became grandma and Papa to this treat loving grand.

My daughter and Kabella have a very close relationship. Kabella follows her everywhere she goes. When my daughter was recovering from her oral surgery and her recent knee surgery Kabella rarely left her side.

While my daughter has probably never warned her little four legged one about the dangers of losing her eye a recent accident came very close to doing so. The role of patient and the loyal friend changed over night. My daughter is now rarely leaving the side of her sweet recovering Kabella. 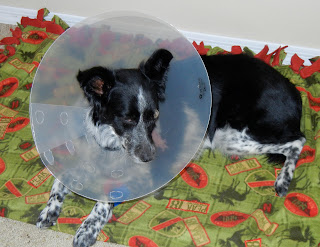 Kabella suffered a severe eye injury to her eye when she was attacked by another dog who has always been very friendly with her. In a split second her eye was bleeding and cut. My daughter washed her wounds and watched her closely. By morning we knew that she needed to be seen by a vet. After seeing the vet Kabella was sent home with and eye ointment and some pills for pain. My daughter stayed at her side offering gentle strokes and whispers of support. The pain appeared to be too severe for the pain medication to relieve. It was very sad.

Over the next few days things got worse instead of better.  We took her to a second vet for a second opinion as soon as they opened on Monday morning. It wasn't good. Kabella needed to have eye surgery. Her eye ball needed to be reconstructed and stitched as did her third eye lid. 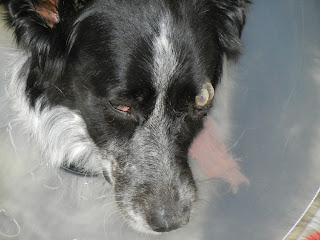 She came home from her surgery with two buttons sewn to hear eye lid. She now has a nickname of "Buttons". The buttons help to keep the stitches in place. It has been a precious sight to see my daughter being so compassionate, caring, and loving towards Kabella. It is clear that Kabella has become a loved member of our family. From the compassion and support shown by my grands it is evident that Kabella is one of the cousins!

When the accident happened I couldn't help but turn into one of those "that could take your eye out" kind of mothers. Any one of my two legged grands could have been in the wrong place at the wrong time just as Kabella found herself. That is one scary thought!