Special Guests for the Day

Two of my grandchildren go to a small country school that their mother hand picked for them to attend.  While most schools have several classes per grade and large numbers of children in each classroom this small country school is very different. It is K-6 grades and there is one class per grade. The classes have right around 16 students with a teacher and an aide for each class.

Something else this small school is able to have is some great enrichment activities for the students. This year the kids were able to invite their grandparents to come and have lunch with them. Papa and I went and joined our two grandsons for lunch. It ended up being quite a day with a big Cinco De Mayo celebration! 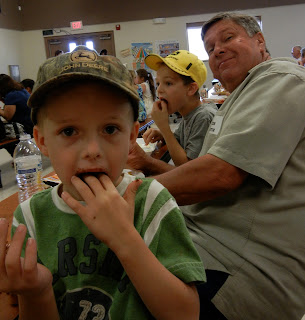 The kids had the school lunch and the PTO had a special lunch
for the grandparents that included a cupcake.

We treated our grands to our cupcakes! 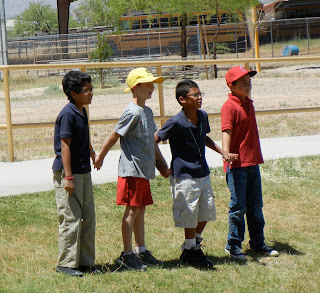 After lunch the little one went back to class because
he didn't want to miss the Otter Pop sale with his class.

Papa and I sat on a nearby bench and enjoyed watching
our grandson playing with his friends
and we reminisced over a game of red rover. 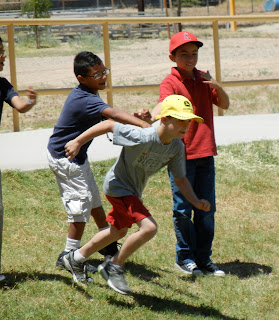 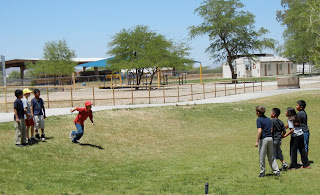 He and his Papa went and played some tetherball on the playground.
This was extra special because the rest of the class was back in class!

We put a tetherball in our backyard last year for
this tetherball loving grandson! So, he and his Papa
play lots of tetherball at home but getting to play at school
together I'm sure will be long remembered.

Before we knew it it was Otter Pop time for our older grandson.
I know that all of the kids get by all year long without me worrying
about them but I had to make sure there was no child left out
because they didn't have a quarter.

There was only one child from the whole class who didn't get one.
And, I couldn't treat him to one!
Not being able to participate in the Otter Pop sale was
the consequence for some bad behavior he had at school that week.
So, so sad!

Once the Otter Pops had been enjoyed our grandson invited us
to go see his science project.

We were on our way when our youngest grandson
spotted us. He caught up to us and invited us to
go to the Otter Pop sale with him and his class.

It's a good thing there were two of us.
I made Papa promise to get me a good picture
of the science project.
We divided and we conquered! 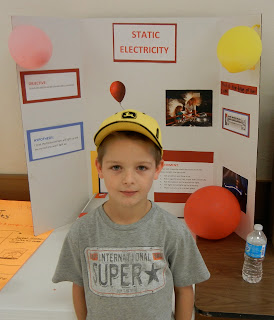 It's funny that this was the topic of his project.
A few weeks earlier I had entertained the boys
with a bunch of small blown up balloons.

The activity:
Create static by rubbing the balloons on our hair.
We completely covered the little brothers head
in balloons using static electricity!

Who knew I was teaching something useful? 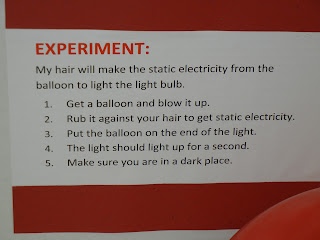 While I was missing the science project I was front and
center at the Otter Pop sale. As his teacher walked by me
she handed me a pair of kid safe scissors and I was
put to work snipping off the tops of the otter pops
for the entire K class.

Once my grandson got his Otter Pop(s)
he pulled out a pair of gloves he had borrowed from his
dad that morning for Otter Pop day. When I asked him about
the gloves he said "So my hands don't get cold and sticky!"
Now, that's planning ahead! 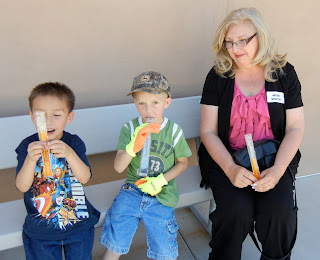 What fun I had! 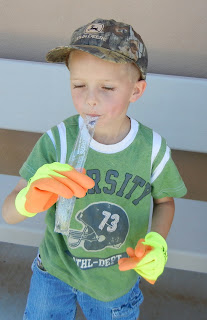 My memories went back to my own elementary years.
My favorite sales were the candy apples and the 50/50 bars!
I'm always looking for a candy apple just like I remember them.
Fat chance!

His classmates really took to me and they were
excited to meet my little guy's grandma!

I was told by several of the children that
their grandma's live far away.
I was feeling very blessed.

Papa and I were still hanging around because
we had been invited to attend the
Cinco De Mayo celebration. 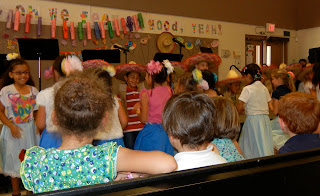 The first grade class performed by dancing and singing in spanish. 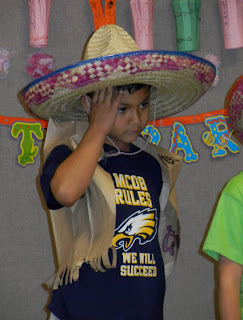 It was pretty darn cute! 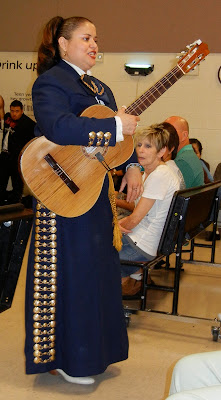 A female Mariachi.
She was excellent!

Every child was glued to her performance.

I loved the costume.
One of my all time favorite dresses
was navy blue with gold buttons. 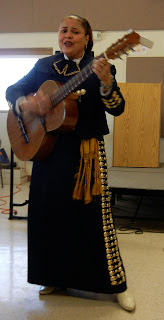 This gal emotionally shared the history behind her becoming a Mariachi.
It was her Tata (grandfather) that began teaching her the art as a young girl.

Tata was there (with his own guitar and cane). They were both crying as she
shared her gratitude to her grandfather for his love and support.

I couldn't help but watch her Tata as his granddaughter performed.
He was playing and singing along with her and there was no question
of just how proud he is of his very talented granddaughter. 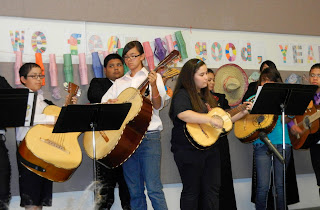 I learned that they teach Mariachi playing and singing
at a junior high and high school in a town near us.
I had no idea. 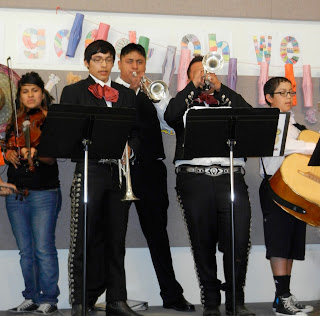 The students from the other schools put on
a very entertaining performance.

At the closing of the performance they announced
that no Mexican celebration is complete
without food.

There were churros, and cups of punch, and Horchata served!

It was a great day shared with two
little boys that we love
mucho, mucho much!


Posted by Grandma Shelley at 9:50 PM