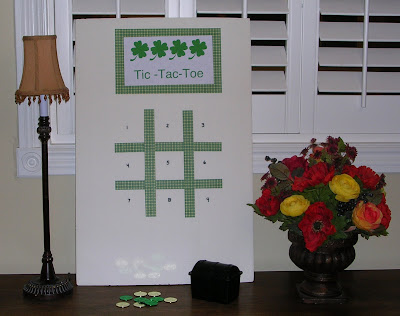 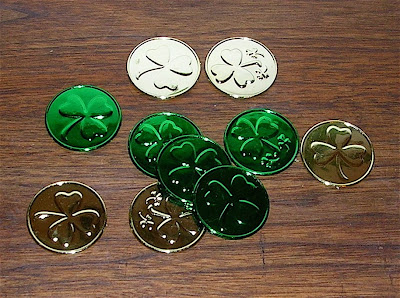 I created this fun Saint Patrick's Day Tic-Tac-Toe game for the children's singing time activity at my church. It was a group activity with two teams. Each of the squares on the game board were numbered. When they (one child from the team) placed their colored coin on the board the entire group would then sing the song that matched the number. After singing, it would be the next teams turn. The next team would place their coin of the opposite color on the board trying to get three in a row. The entire group would then sing the song matching the number of their choice. The goal was to get three in a row with the prize being getting to sing a song of their choice.
The base is a foam core board from the dollar store. Scrapbook paper cut in strips created the 12" game lines. The computer generated shamrock tic-tac-toe header is placed on a backdrop of matching scrapbook paper. Everything was put in place using a glue stick.  The coins can be found in party, craft, or maybe even dollar stores. I used blue painters tape on the back of the coins so they would easily peel off the board without damaging the game.
This idea could be used for a Saint Patrick's Day Party or a family activity. Instead of singing, you could have the children to do something silly, answer a question about themselves, or just take turns playing a BIG game of Tic-Tac-Toe.
This idea could be used for any holiday by making up the game board and the game pieces to fit the holiday.
Posted by Grandma Shelley at 7:33 AM