Camp Out Cake Walk of Sorts 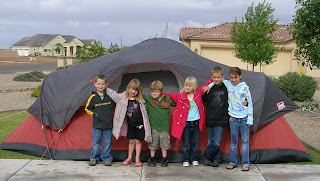 The kids really enjoyed a game that I made up for one of the activities at the camp out. Last year we had had a unit on the animals of the Southwest. I first reviewed the pictures of the animals from the previous year. It created quite a conversation between us as they all shared the facts that they had remembered about the animals.

The same idea could be made a bit more difficult for older children by asking more challenging questions about the animals or the objects that you choose to use. We also made it more fun by having the children do different actions as they went around the circle or changing the direction of their march. For a few rounds we made certain animals wild, which doubled the prizes, and some animals that voided any prize at all. Everyone was great sports and they all enjoyed this very simple and fun learning activity.
Posted by Grandma Shelley at 9:44 PM