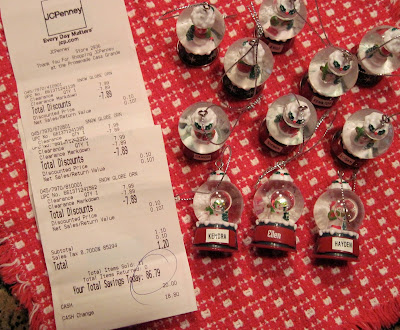 Hitting the Christmas Clearance rack in Penney's in February was like hitting the jackpot for me! I am on the lookout throughout the year for things that can be used for my Grandkid's Christmas Day Camp. These snow globes were originally priced at $7.99 each. You would probably agree that they were originally priced way too high. As you can see they had names imprinted on them which must have clearly added to their value. They had been marked down to just .10 cents each. I picked up eleven of them with a plan.

I teased the cashier that I was lucky to find all ten of my grandchildren's names! Truthfully, I had not found a single one. I was choosing short names that I knew I could easily cover with my my handy dandy label maker that I had at home. I made all of the changes making a personalized snow globe for each of my grandchildren for a grand total of $1.20 and one extra to be used as an example of whatever I create to use them. That was a savings of $86.79!!!

You will have to stay tuned.... next Christmas Day Camp the snow globes will be transformed into a super cute craft of some sort or maybe they will be used as a prize in our annual Candy Walk Game.
Posted by Grandma Shelley at 2:18 PM