Unexpected Dinner Guests in one Hour? 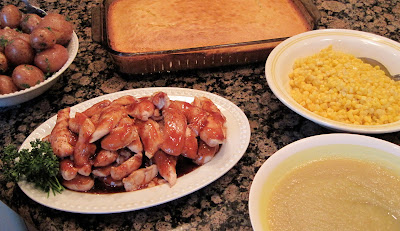 This is something that I had only heard of happening to others. I had never experienced it first hand. I came home from a late afternoon meeting and I was met at the door with a frantic "We have dinner guests coming in one hour!" My husband (first time ever) had forgotten to tell me. I did not panic, I rather, took a quick look in the pantry and decided what could be pulled together in that amount of time.

Red potatoes, jiffy cornbread mix, applesauce, a brownie mix, and BBQ sauce. A quick look in the freezer netted two packages of chicken tenders, and a couple bags of frozen corn. The frozen chicken was put in warm water to thaw while the doctored up jiffy mix went into the oven. Hubby mixed up the brownie mix and got it in the oven too. Red potatoes were put on to boil and hubby was put in charge of shining the silverware, the glasses, and setting the table.

The red potatoes got a drizzle of melted butter, some chopped parsley, and a nice sprinkling of sea salt, The corn was cooked in the microwave, the applesauce dumped in a bowl, and the chicken roasted quickly in the oven (when the brownies came out) with a glaze of doctored up BBQ sauce. The cornbread was served with butter and honey. The brownies were left on the kitchen counter to cool for dessert.

It was a very busy hour but the results were ample, quite yummy, and most importantly on time!
Posted by Grandma Shelley at 2:40 PM