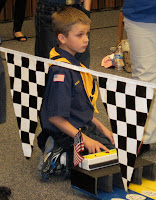 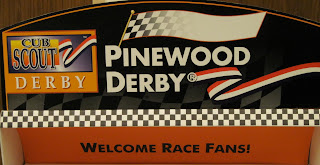 Boy...Oh...Boy has the world of Pinewood Derby's changed for the next generation of racers. My grandson's Cub Scout troop recently hired a professional service to come in to run the races.  I walked in just as they were beginning the event. There was really cool background music playing and an announcer with a booming voice welcoming the race fans.

The hired crew was decked out in matching racing uniforms. The track had five or six lanes. The track was sectioned off with long banners of checkered flags. The announcers table was covered with a black and white checked linen and skirting. The picture above shows the backdrop for the pit crew area. The pit crew area (for the racers only) had  a cubby hole (parking space) for each of the cars in to be parked in between the heats. Between the heats the race fans enjoyed all kinds of fun racing music. So much fun!

The real kicker was that the track was completely computerized. The cars were manually set in place but then a computerized switch sent them down the track. There was a sensor at the end of the track that showed every cars time. The complete rundown with the racers name, the name of the car, and their time appeared (within 1/100th of a second) on a jumbo screen. The computer announced the winner over the sound system. This was cutting edge stuff for our little town. 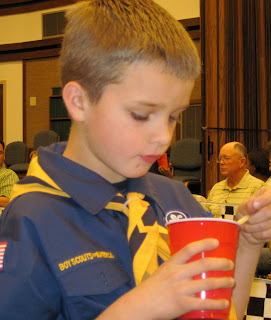 The whole event was so much fun for the race fans. I can only imagine how cool it was for the boys. The entire Cub Scout troop couldn't have been more proud of their individual Pinewood Derby cars and their smiles couldn't have gotten any bigger.

I loved seeing the boys being supported and cheered on by their families and a big crowd of friends. My grandson designed his own car. It was actually a army green military tank. His daddy who is an engineer told him that his design wouldn't be very fast. My grandson made the final decision to go with the tank. The green military tank may not have won on the track but you would have never known it from his excitement, the pride he took in his craftsmanship, and the excellent sportsmanship he demonstrated. Grandma was very proud!

YUM..... Root Beer floats were the perfect ending for both the uniformed racers and their fans.
Posted by Grandma Shelley at 10:13 PM