The Grandkids Camp Out turned to serious business when I began this project with the children. I explained to them that we were going to be doing a project that had some danger involved. The word "danger" seemed to peak their interest but at the same time they became very serious about what I was saying.

They listened carefully as I presented the rules with a warning that if at any point someone wasn't following the safety rules that the project would have to be put away.

I had made a buddy burner ahead of time to show the children the completed project. We talked about how we store extra canned food, bottled water, and other items in our pantries in case we need them in an emergency. We discussed reasons why having canned heat on our pantry shelves would be a good idea too. We also talked about using canned heat while camping for warmth or for cooking.  For our purpose, I had a tailgating party planned for the next day. The buddy burners were going to be used for cooking our lunch the next day.

Each child was given a tuna can with their names printed on the bottom and strips of precut cardboard. I demonstrated how to roll the cardboard and how to place it in their cans. 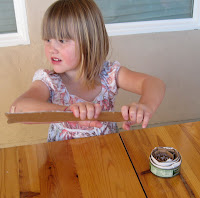 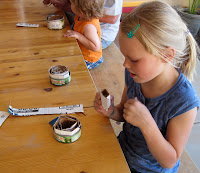 Papa sat close to our youngest campers and helped them complete their projects. 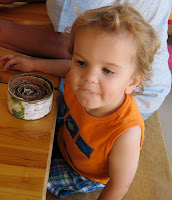 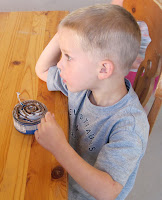 Once the cans were stuffed with cardboard it was time to add the wax. Safety rules were repeated and each child raised their hand showing that they understood the rules and that they promised to follow them. You can melt a can of wax to pour over the budding burners but I chose to make it more of a hands on do-it-yourself project and allowed the children to each light a candle and drip the melting wax over the entire can of cardboard. EEEEK.....Papa is looking at me like what are you doing???? We both kept a very close eye on the children to keep them safe. 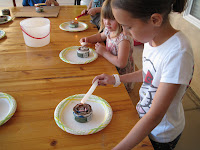 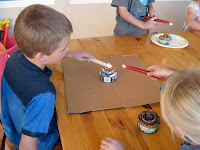 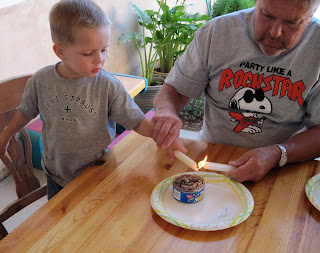 I was very proud of the children for following the safety rules. They absolutely loved making this project and some very important lessons were taught along the way.
The buddy burners were used very successfully the following day at our Camp Out tailgate party! 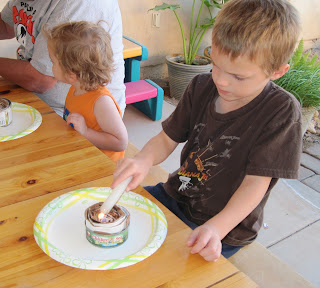 Posted by Grandma Shelley at 10:17 AM