At the Grandkid's Camp Out this year the tradition of our night hike was replaced with a Rock Star Dance Party just after dark. After dinner the kids got ready for the dance party. They were all given a rock n roll camp t-shirt to wear to the dance. A selection of bandanas, tattoos, their guitars, and their rock star wristbands turned them into little rock stars ready to party! 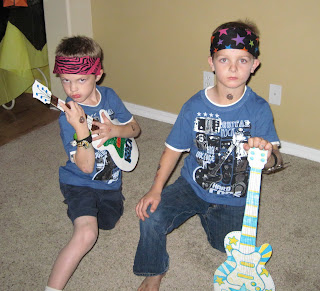 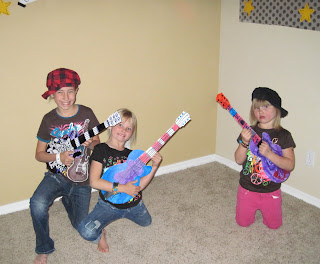 When the party time arrived the lights were turned down and the dance party CD was turned way up. Papa and I had burned a special rock-n-roll CD for this special occasion. I will share our really fun play list in a later post.
The kids danced hard and played their guitars even harder! I had a battery operated strobe light of sorts that added to the rock n roll theme. I had found the light for pennies on the dollar at an end of the summer clearance in Walgreens. It is meant to be a light to float in a pool but when I saw it I knew it would be perfect for the rock n roll theme. It has multiple settings and the kids thought it was way cool! The colorful lights seemed to strobe across the ceiling and walls to the beat of the music. 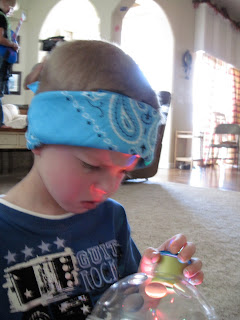 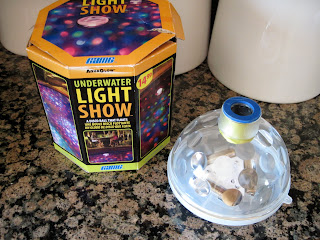 About half way through the dance party we stopped for refreshments. Glasses of sparkling Sprite on the rocks were served in plastic stemware glasses. The toasts to one another were really fun to hear. "Cheers to rock stars!", "Cheer's to cousins!", and my personal favorite "Cheers to our rock star grandma!"
The kids thought the cups were really cool and after the dance party the cups were tucked away in their Camp Out tote bags as a keepsake to take home. 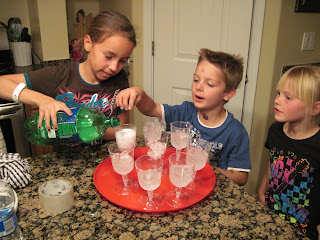 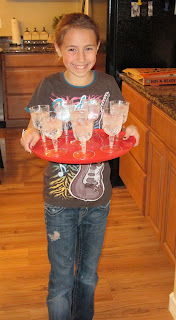 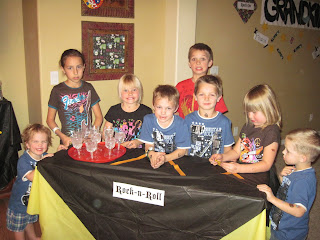 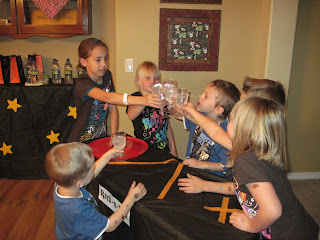 We also served boxes of popcorn and m&m's! 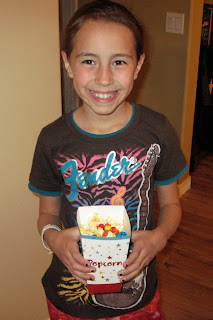 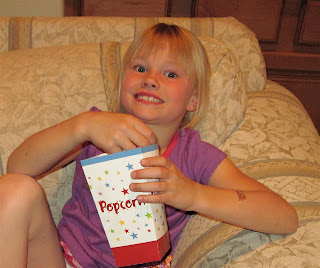 Although the kids started out being a bit disappointed that the night hike was not in the schedule this year they were as happy as they could be at the dance party. They all had an absolute blast! 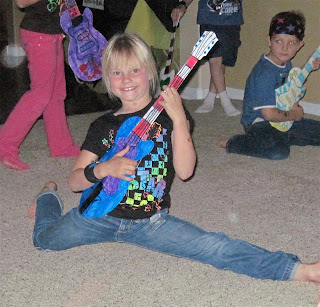 Posted by Grandma Shelley at 10:11 AM

Email ThisBlogThis!Share to TwitterShare to FacebookShare to Pinterest
Labels: activities for grandchildren, entertaining, grandkids camp out