A Big Back to School Surprise (Part 2)

The Back to School Party 2010 continues.... If you missed part one of the back to school party you may want to start in the beginning with the post titled Back to School Party 2010. I did not intend on teasing you with the to be continued....  but the post was just getting too long and I have so many pictures I want to share.
When the kids saw the Pointe Hilton sign and the huge resort that is built on the side of a mountain they were one very happy and surprised bunch of cousins! 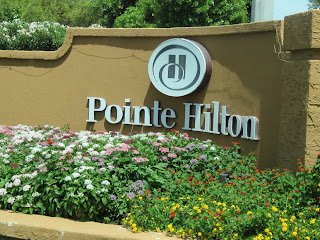 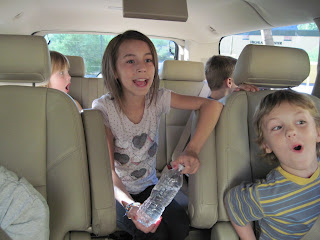 "It's a hotel!"
"But, we don't have what we need to stay here!"
Papa told the kids to look in the very back under the blanket where each back to schooler had a bag secretly packed by their parents with everything they needed for our surprise field trip.
Before we got out of the car to check in at the front desk I explained to them that it was a very nice hotel and that we needed to use our best manners. Fat chance, I thought because the excitement level "times 6" was in full blown overdrive!
All heads turned by others (mostly young couples probably looking for a romantic get away)  in the parking lot as the kids kept coming out of the car. Upon arrival to the front desk and lobby there was no mistake that our clan had just hit the Hilton property for a night of energetic fun. The kids ran straight to a big window on the opposite side of the lobby where all six noses pressed on the glass to see one of the beautifully landscaped pools and waterfalls. 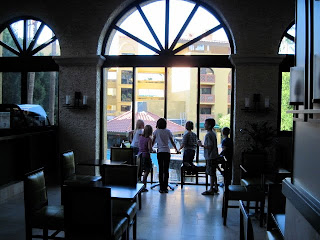 Papa and I had reserved two adjoining rooms. One for the girls and one for the boys.
Each child helped unload the car and carry all of our belongings to our rooms. 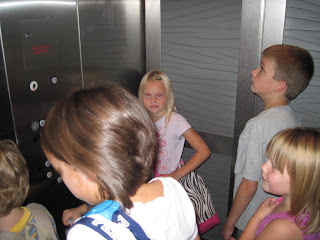 The elevator ride as cousins was a pretty awesome activity in itself. 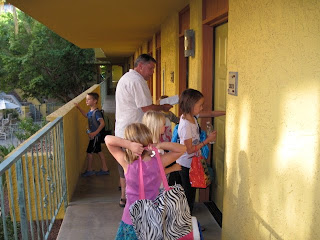 It was a race to see which child could gain control of the electronic room key. Once we were in the room everyone scattered to check out every square inch of the two suites. Before Papa could warn me to tell the girls to leave the zip tie on the fridge and guest bar it had already been ripped off to check out the high priced goodies inside. Everyone was firmly told to not take anything from in there! Can you imagine the damage that six kids could cause to our hotel tab?
The adjustable reading lights over the beds were super cool to the boys. 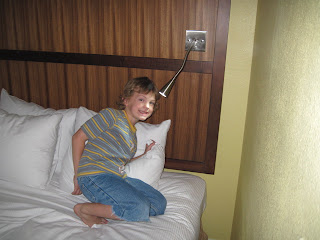 The adjoining balconies were a very fun find too. 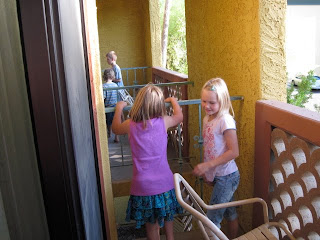 We had four televisions and four remotes between our two suites and plenty of beds. Papa and I had chose this hotel because of the pools and pool side activities that the resort offered for children.
Everyone changed into their swimsuits, lathered up in sun screen, and we headed for one of the three family pools.
Every trip to the pool required a trip through the hotel gift shop. GRRRR! This is where we were asked how many towels we needed. The answer was always eight which was quite a pile. 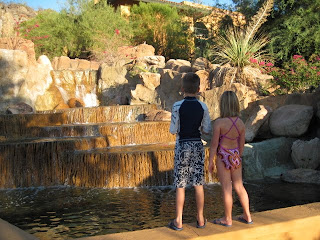 Two of the cousins stopped to check out the amazing waterfalls just inside the entrance to the pool area. 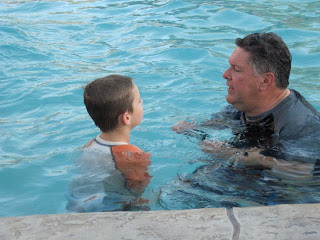 Papa jumped right in while I captured our first moments in the pool with the camera. 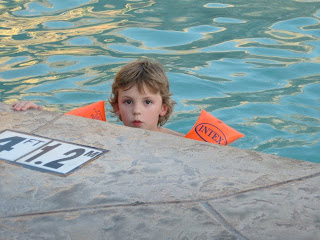 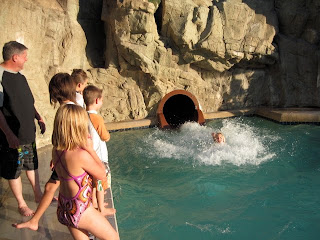 Our seven year old dare devil granddaughter was the first to try the water slide that went through a very tall and dark mountain! Everyone else waited to see how it was before they gave it a try. The water slide got raving reviews! (You will have to wait until later to hear about MY experience with the slide!) 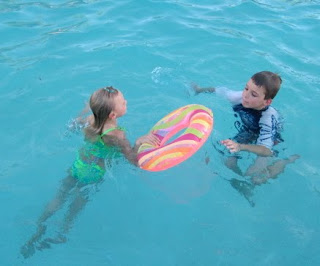 All of the cousins swam and played hard and they worked up quite an appetite. We all headed back to the room and we sent Papa to pick up some pizza for dinner.
The kids worked together to bring our two coffee tables into one room to create a shared eating space for the six cousins. They sat the table with paper plates and our traditional back to school party cups. 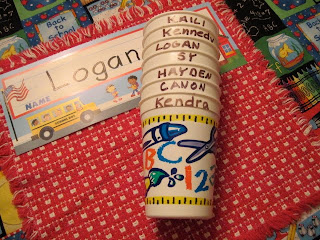 The kids were beyond hungry..... they were now starving...and they wanted to know what was taking so long. They began watching through the peep holes in the doors and through the windows for sightings of Papa and the pizza. Most importantly, the pizza at this point. Papa was gone for less than twenty minutes. 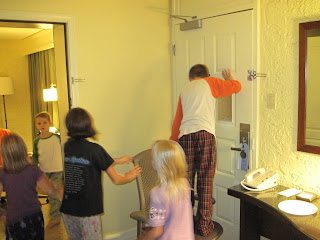 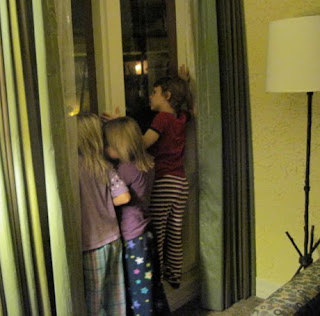 Wait, I see him.... no that's not Papa. Is that him? No. I think that's him. No,  it's not! It was like being in a locked cage with starving zoo animals before feeding time!
Papa was a rock star when he arrived back with the pizza. It was fun listening to the kids visiting over dinner and hearing about the fun they had already shared. They kept saying "We can't believe you brought us to a  hotel!" Papa and I just smiled at each other. 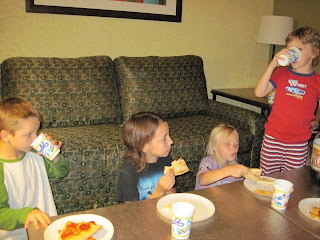 After the kids tummies were filled with pizza we headed back down to the pool as the sun was going down. Swimming after dark changed the whole experience for the kids. Once we got in the pool the kids noticed a couple sitting at the pools edge in pool side chairs behaving very inappropriately for a family pool. (They really, really liked each other.) The two oldest grandchildren a boy and a girl came up with a scheme to clean up their act! (unknown to me) The two grandchildren went to the pool edge right in front of the couple and yelled out ready set go! They then both kicked off and kicked their feet as hard as they could. When the two grands came up for air across the pool the two love birds were wiping themselves off, gathering their things, and moving on!
Before long we ended up having the entire pool to ourselves and we stayed until the pool closed at 10 pm. 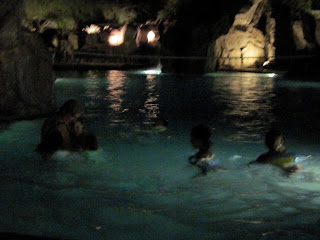 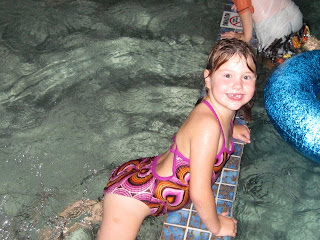 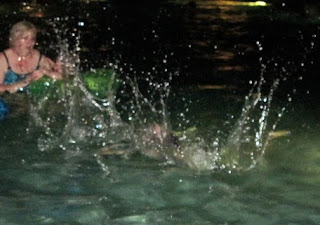 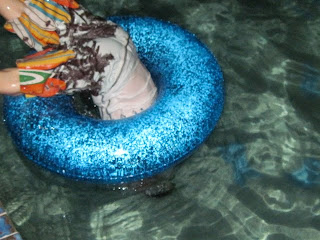 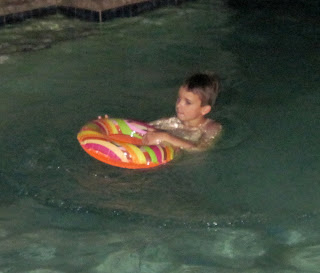 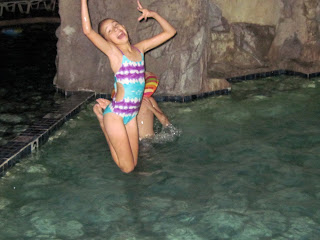 The kids played and played and Papa and I were as pleased as we could be that everyone was having such a good time together.
We had taken two sets of water wings, six small rings, and three bigger tubes. The three bigger tubes were used for a game the kids called bumper boats. They played it in an area where the pool was only 2 1/2 feet deep down to nothing on a beach type edge. They played as partners with one kid in the tube and the other to push the bumper boat. 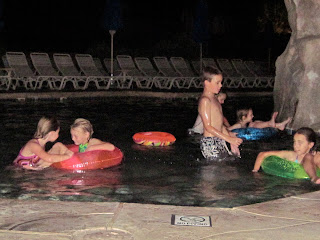 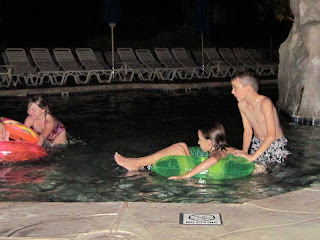 They were having an absolute blast at 10:00 in the evening when we had to call it a night. They hated to stop their play but we promised we would be coming back in the morning. The kids  said it was like Papa and I had rented the whole resort just for them with us having the entire pool and the surrounding areas to ourselves. It was pretty cool indeed!
We walked back to our rooms and Papa and I always split up between the kids that wanted to take the stairs and the kids who wanted to take the elevator. Once we were in the room we did not have to coax them to get ready for bed. They were all ready to call it a day.
Teeth were brushed, pajamas were put on, and three of the four tv's were turned on just because they could be but the kids all fell asleep very quickly. 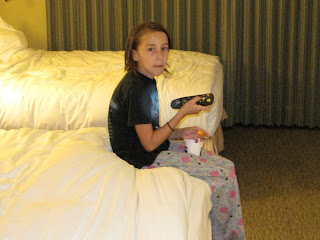 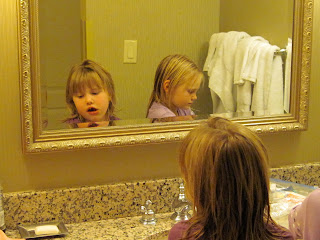 Everyone got tucked in with a hug and a kiss and a big thank you for coming to our back to school party. 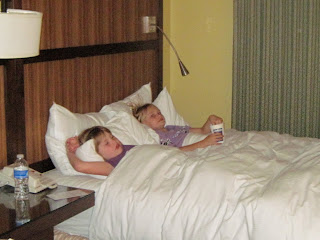 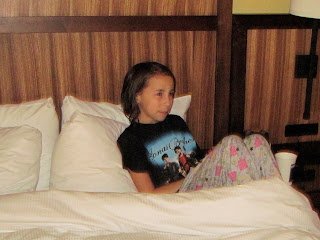 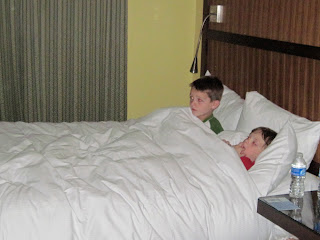 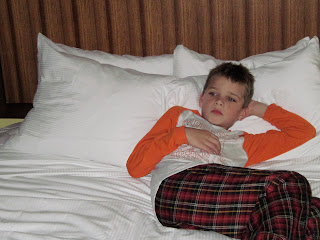 Papa and I had made it through day one of our big surprise and we were pretty confident that the next day was going to be every bit as good!
To be continued.... Go here to read Part 3
Posted by Grandma Shelley at 7:44 PM