Grandkids Back to School Party 2010

Our annual back to school party for our grandchildren is a family tradition for Papa and I and our school age grandchildren. This year we had one first grader, three second graders, one fourth grader, and a fifth grader all old enough to attend the party.
Invitations went out to each child inviting them to the party at grandma's house with the date and the time. The date and time had been previously approved by the parents. Papa and I had a few other secrets with the parents that the kids would not find out about until the back to school party was in session.
All of the children arrived on time and they were ready to party. They were planning on the usual couple of hours of games and snacks with Papa and I. As the children arrived we invited the parents to come in too. There was a permission slip on the table for each child for a Back to School Party Field Trip. Each of the children wrote in their name and they had their mothers sign it before turning it back in to Papa and I. The location of the field trip was kept as a surprise. 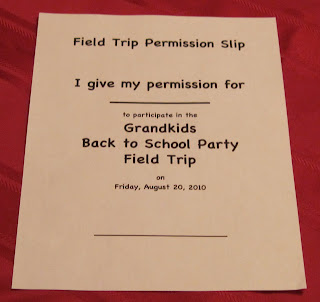 We started off the party just like any other year by doing the Hokey Pokey together. We then issued each child a water bottle with their name written on it and we told them it was time to go on our field trip. They had no idea what was going on but the excitement built with the anticipation of where we might be going. 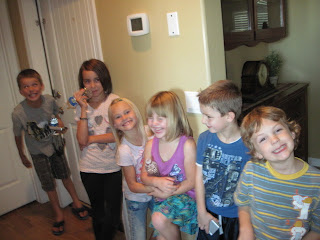 The Back to School Party is a party with rules just as if they were at school.  When it was time to leave on the field trip we chose our line leader and everyone lined up to walk out to the "cousin bus".  Papa was the boys field trip leader  (and the cousin bus driver) and I was the girls leader. The kids cheered with excitement when the leader assignments were made! 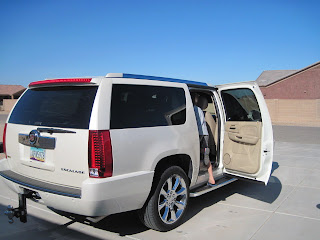 Once everyone was on board the field trip began. We were only in route for a few minutes when the kids learned that we were leaving our little town. Papa turned onto the freeway that headed toward Phoenix. Snacks and a movie playing on the on the dvd player made for an amazingly quiet ride. 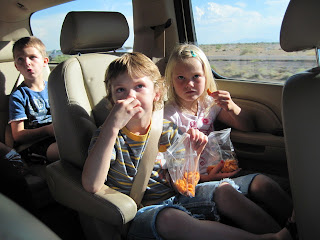 The ride to our destination was about an hour long. About fifteen minutes prior to our arrival we started asking them where they thought we might be going. One of the boys really hoped it was to a dollar store. Another guessed Flagstaff while another guessed our mountain cabin in Prescott. Some were hoping for dinner at McDonald's and others for dinner at Taco Bell. 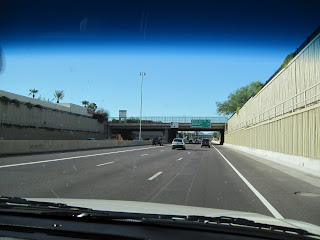 I was asking questions such as; "How would you like to go camping without a tent?" "Have you ever been bowling?" " How about mountain climbing?" "How about ice skating?"  Everyone had a response of why my ideas would be too dangerous or inappropriate. They were not wearing the right shoes, they didn't bring a sweater, the balls were too heavy, and on and on.
I then started giving them hints.  The first hint was that where we were going was very close to a mountain. One grandson piped up saying; "There could be a hundred places by a mountain." We were in the valley of the sun  and we were surrounded by mountains. Next clue was "It has lots of doors." First guess was a hotel. I reacted with an "Oh my gosh, that would be really crazy!" The next guess was a school. I decided to play along with that one and said that would be a perfect place for a back to school party wouldn't it? They responded with a less than excited: "No, we've already been to school all day!" "Grandma, I have already done lots of school work today!" Two of the  cousins who share a class at school said "We already had a really hard test today!"
I decided that they had had enough teasing and I pointed out that we were very close to a mountain and asked if there was any place with lots of doors nearby. Just then Papa slowed down to turn into our destination. When they discovered what the destination was the entire "cousin bus" could not believe their eyes. Papa and I were just as excited as they were to share in this very special field trip too!
To be continued.... Check out part 2  here.
Posted by Grandma Shelley at 10:02 PM