I love knowing that my adult children listen to their children and that they work to enrich their children's little lives with new experiences, activities, and learning such as this.

The outing required a lot of preparation and some expense to prepare drinks, snacks, boat rentals, and to provide all of the fishing gear for the two year old and his fellow fishermen.
On the day of the fishing outing we all woke early at our mountain cabin. All of the kids were anxious to get on with the day. There was lots of chatter among the cousins about the outing.  Although it was the two year olds idea, all of the siblings and cousins were onboard in the shared excitement!
The plan was for Papa to go help on one of the boats and for my daughter and I to stay on shore to watch and take pictures. Two cars of kids and adults arrived before we did and they rented two boats and they went out on the lake before my daughter and I arrived.
When we got to the lake we could hear and recognized their voices echoing across the water. We realized that they were too far out to get any pictures. What to do, since we had the cameras?
My daughter and I decided to get our own boat and surprise them on the lake. We got a quick lesson on how to run the boat and off we went on what was a new adventure for us too.
Before I knew it I heard this word from far across the lake "Grandma!"  We had been discovered. 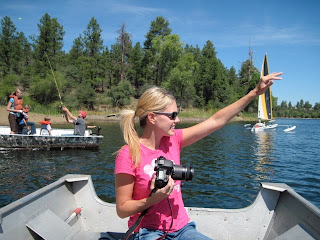 Our arrival as captains of our own vessel surprised everyone. This was an occasion that had to be caught by cameras. The two year olds mommy was thrilled to see her little boy holding his own fishing pole while sitting right next to his daddy. It was way fun seeing the little guy steering the boat all by himself. Hearing the laughter of his papa and daddy as the boat went round and round in circles is now a priceless memory that my daughter and I are so happy we didn't miss. 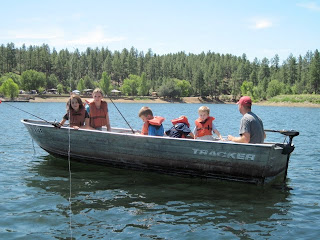 This is the little guy's  aunt, uncle, three boy cousins, and his big sister on the lake. 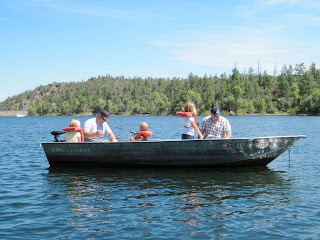 The boats were full of activity keeping everyones lines baited, untangled, lines cast out into the lake, thirsts quenched, and snacks in hand.
I am quite sure with this crew of fishermen, all of the chatter, the stomping around in the boat, and the yelling back and forth between the boats of cousins that the fish were all quivering while hiding somewhere very far away!
No one got a single bite on their lines but it didn't seem to matter. One cousin yelled across to the other boat of cousins and asked if they had caught anything yet. My six year old granddaughter yelled back; "Nope, but we're still hopin'!" This was after one and a half hours of fishing. 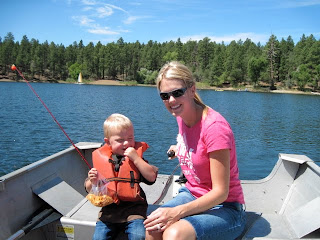 The little guy joined mommy and I for
a little bit on our boat too.
Our two hours on the lake went by quickly but the photos caught and the memories created will be ours forever. Our fun day on the lake was realized all because of one little boy who wanted to do something just like Little Bear with his daddy.
Most meaningful to me was seeing not only his parents supporting the dreams of the little guy but also his aunt, his uncle, his cousins, his siblings, and his grandma and papa who all wanted to share it with him.
They say it takes a village to raise a child. As a family, I see my adult children doing this for one another by helping to support, protect, nurture, enrich, teach, show their love, and mentor all of the nieces and nephews in so many ways. I am a very blessed mother and grandma indeed!
Posted by Grandma Shelley at 9:48 AM