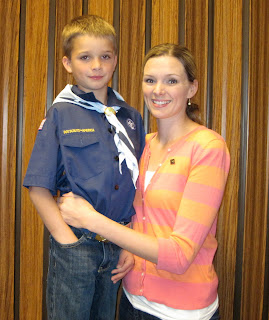 My oldest grandson who is nine became a cub scout when he was eight years old. He is a very smart boy and scouting is another avenue that he and his parents have to keep his mind busy and growing. Scouting offers new experiences, opportunities to serve others, it helps to build confidence, and it reinforces ethical standards. All very good things!
I have had a wonderful time sharing in the Pinewood derbies, pancake breakfasts, and pack meetings with my grandson. Seeing the love and support that he gets from his parents is a very good thing as well.
The skills and ethical standards he is gaining through scouting as a child is something that he will carry with him throughout his adult life. I have heard so many stories on how being an Eagle Scout helped to land a great job.
Boy Scouts of America has a wonderful website that outlines the benefits of scouting.
http://www.scouting.org/Parent/Benefits.aspx
In today's world I believe scouting for boys is more important than ever. Parents who support scouting and their sons in the scouting program are giving their boys a gift that will be with them forever.  The 12 points of the Scout Law will not only bless them now as young boys but also as they become young adults, husbands, fathers, businessmen, neighbors, and our community and our nation's leaders.
On the Boy Scouts of America website it gives an accounting of how scouting carries through to adult life:
As youth, Scouts are taught to live by a code of conduct exemplified in the 12 points of the Scout Law, and they continue to live by these laws in adulthood.

Posted by Grandma Shelley at 1:18 PM