Last Sunday the children at my church put on a program for the entire congregation. It is something that we had been working with the children on for months. The children had learned many songs and each of the over 50 children had a speaking part.

To show our appreciation we visited each class and told them what a great job they had done and we invited each child and teacher to choose a goodie bag to take home.

We had a choice of three goodies. The three members of the presidency had each made up 24 bags of goodies. My bags had popcorn balls, another a brownie, and the third a cookie bar. 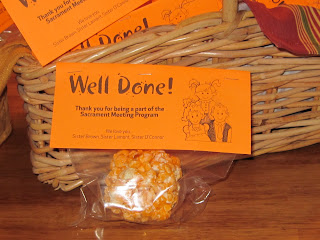 I had seven grandchildren sprinkled throughout the classes. They all knew about the popcorn balls that I had made but I had to tell them that they were for another time.
Every one of them had wanted a popcorn ball when I had them at home but then each was forced to make a choice between the three treats. They all looked at me while their minds were working away.
"I wonder if I could score one goodie now AND a popcorn ball later at grandma's house?" "Is she going to have any leftovers?" "Does she have more at home?"  "Will she make more for me and the cousins?"
Only one grand was brave enough to come up and whisper in my ear. "Grandma, do you have more popcorn balls at home?" I told him that I had brought them all and that I was probably going to be giving them all away. I  told him that we could make some more another time. He then opted for another one of the goodies.  He knew that there would be a popcorn ball in his very near future and that he was going to get to help his grandma make them.
He came over after school a couple of days later and we made popcorn balls.
Easy Popcorn Balls: Yields 10 medium sized popcorn balls
Air pop 11 Cups of popcorn. He smiled through the entire popping process! 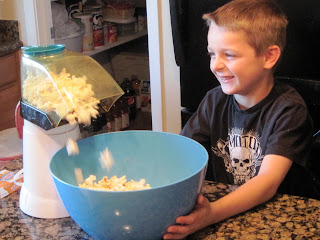 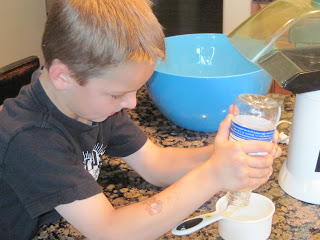 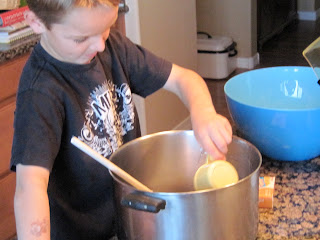 Stir with a long handled wooden spoon. Bring to boil over medium heat. 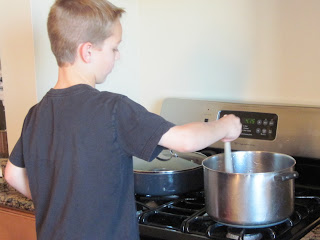 Once it comes to a complete boil, remove from heat, and stir in 1  3 oz. box of Jello. (Any flavor and color.) We chose orange Jello for Halloween. 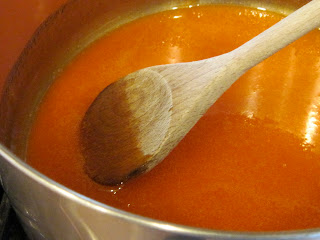 Add the popcorn to the pan of syrup and stir until all syrup has evenly coated the popcorn. The syrup and pan are very hot so be careful. (I did the beginning stirring and allowed him to finish.) 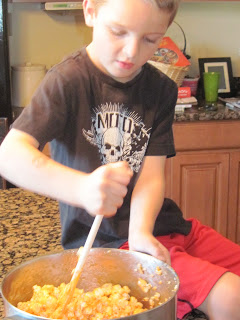 Once in cools enough to handle. Butter your hands and form popcorn into balls. Work fast because it gets very sticky quick. 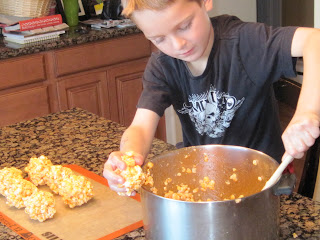 Once the balls are cool you can bag them up to keep them fresh. 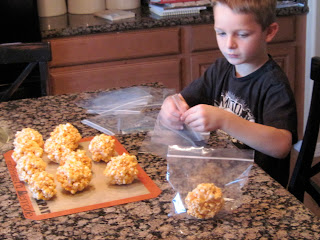 At the very end I told him there was one more thing
that he needed to help me do.
We each got a spoon
and we scraped and ate the sticky pan clean!
Posted by Grandma Shelley at 3:20 PM