It was fall break and I was thinking his family must have decided to go away for a few days. I told him that I would be happy to watch his snails. He said; "Okay, I will bring them right down. I then asked to speak to mommy.

I first said: "I'm sorry, but I don't think I heard him correctly. I thought he said; Would you baby-sit my snails." She said, "That's right." then proceeded to tell me what was going on and was trying not to laugh because her little four year old was taking his ownership of his new little pets very seriously.

He had found the snails on his front patio the day or two before. He considered them babies and they needed constant care. Every errand that mommy and he had gone on..... the snails went too. At bedtime the night before mommy had been summoned to his room. The tired little guy said; "The snails are having a hard time falling asleep." He was trying to keep an eye on them until they had fallen asleep for the night. Sometime during the night the new little pet owner had climbed into bed with his mommy and daddy. When mommy woke up the jar of snails was staring at her from her night stand.

Mommy had a class to teach that morning, no extended trip. The cooking class was at a friends house and when she told my grandson that it was almost time to go. He ran off yelling "I'll go get my snails ready!" Mommy told him that the snails couldn't go this time because some people don't like bugs in their house. "They are not bugs they are snails and they are babies and they can't stay home alone."

After a split second of thought he took care of his pet owning responsibilities by calling a baby-sitter. Me!

Well, I needed to get on my robe. I was expecting a jar full of babies at any moment. When my grandson arrived he was carrying a baby food jar with some dried up grass and a dozen or so non-moving snails in the bottom of the jar. 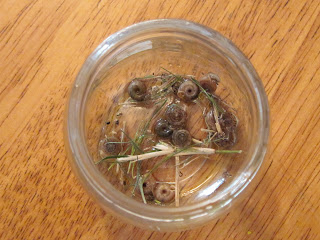 He only had two baby-sitting requests.
"Be nice to them."
"Play with them. They like to play."
I took the jar.
I told him I would take good care of them.
As he was running back home he turned to me and said;
"You know, they are very special!"
I didn't know much about snails but I thought
the habitat was looking a little dry.
I added a few drops of water and left them on the table
while I went to the computer to learn a few
facts about snails that I could share with my
very responsible and attentive pet owning grandson.
When I returned to check on the snails
they were all on the move. 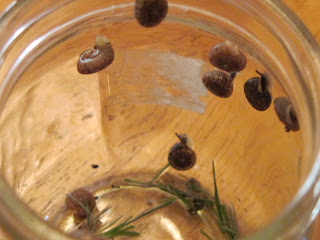 I had read that when moisture is low that they
go tightly into their shells to keep themselves from drying out.
The few drops of water had really perked them up.
Well,  there are always
snacks at grandma's house.
So, why not for the snails?
I had read that they like grass, and maybe carrot and apple. 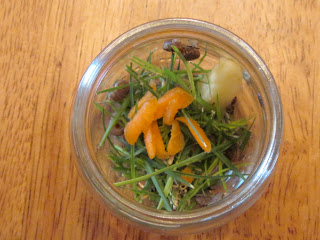 I knew that to my grandson that
for grandma to give his snails a snack
would mean
I was being nice!
In just a few hours he was back to pick up his snails.
I told them that they had been very good. 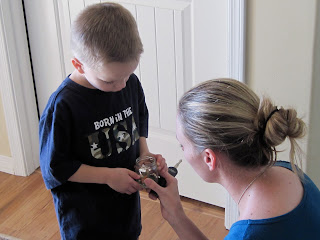 On a quick check he saw them all active and happy.
(playing and snacking)
I shared a few of the facts I had learned
about his land snails with him.
I had forwarded the internet links on to his mom
so that he and his brothers could all learn
some fun facts about their new little house guests.
Being entrusted to care for the snails
was an absolute honor.
This once in a lifetime baby-sitting gig
was very special indeed!
Posted by Grandma Shelley at 9:02 AM