It was a busy day during a very busy time of year when we set up for an Outdoor Christmas Party under the stars for our church. It was a family event to help put on the party for 200+ guests. Although, there was only three family members on the organizing, decorating, and refreshment committee it became a family event (as usual) to pull it off.

The setting was perfect. The location was that of a working farm and we were surrounded by animals. Straw bales were plentiful and they became the walls of the stable for a living nativity and the makings for Santa's thrown. The location was going to get very dark once the sun went down so hundreds and hundreds of white lights were strung.

I and my ten year old granddaughter worked to create a beautiful tablescape for a very simple refreshment and we placed festive centerpieces on the guest tables. I used white lights, cream colored laced, tiered clear serving trays, and shiny gold ornaments that reflected the beautiful white lights on the refreshment table. I don't know that I have ever seen donuts and hot chocolate served with so much bling!

It became a family affair by the husbands being at home preparing dinner for my daughter and my daughter-in-laws young families. My husband had been left home with the task of heating 10 gallons of hot chocolate.... from real milk and Quik and putting it all in two 5 gallon insulated coolers to keep it hot! It was no small task.

I ran to pick up the 20 dozen donuts + 1 that I ate for a quick snack on the way home. Do you have any idea how sweet your car smells with 20 dozen donuts in the back seat?

With the help of our families we all made it home and back in time for the party guests to arrive. Luminaries were lit to create a path in the darkness to the entry of the party. The donuts were carefully put on the serving trays (as I had envisioned it in my head) and set in their places within the tablescape. White lights had been strung along the corrals to lead our guests to the refreshment table. The guests were in awe to see the refreshment table. Just the festive holiday experience we were hoping to give our guests!

There was a huge bonfire burning and sticks and marshmallows for roasting. Everyone was enjoying themselves. The program was simple. There were caroling hayrides under the stars through the farm fields and lots of visiting among friends around the fire while sipping on hot chocolate. 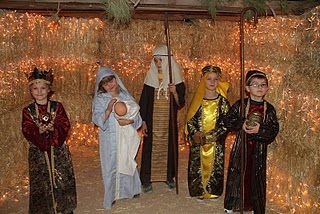 When it was time for the most important part of the evening all of the children were gathered. My daughter had purchased costumes for a children's nativity. My six year old granddaughter was Mary, my oldest grandson was Joseph, and two of my other grandsons were two of the wise men. All of the other children were given the parts of angels and shepherds. The girls were given shiny halo's and the boys cloth head pieces to play their parts.

A simple nativity story was narrated as the children played their parts. At the perfect time a bright star lit up above the stable announcing our Savior's birth. (A creation made by my son.... another family member that was pulled into our party planning assignments)

Many in the audience were touched by the tenderness of Mary. She stayed attentive and loving to her "baby Jesus" doll through the entire nativity.

The children sang a song for us which concluded the nativity program. The children were showered with praise, hugs, and kisses from their parents for a job well done.

We then sang a few more Christmas Carols as a group. Being outdoors around the fire and  under the stars made it just perfect. The last song we sang was Here Comes Santa Claus. And, can you believe it? Santa Claus zoomed in on a quad! He took his place on his straw thrown that had been covered in a red and green comforter. His line was long and camera flashes were many as Santa visited with each and every child.

Everyone had a great time. Our family members all pitched in to help take down the decor, clean up, and to haul it all back home. The party had been a complete success!

As all of my grandchildren were leaving the chatter was all about the next day's plans. Yes, that's right. I was double booked in party planning on this particular weekend. The next day was our 12 hour Christmas Day Camp for kids only at Grandma's house!
Posted by Grandma Shelley at 11:47 AM