I recently told you about my grandson who wakes up everyday and dresses in Wranglers and boots as an adorable little cowboy. I was very surprised when he came to my house dressed and equipped as an explorer. It turns out that all of his Wranglers were in the wash that day.

He came with a backpack filled with items that he was going to use in his explorations. He had it on his mind that he needed to begin his exploration by boat. After thinking on it for a couple of minutes I had an idea.

There she is the USS EXPLORER
setting off on her first adventure!
A coffee table, a smaller table sat to create the point
on the front of the boat and all covered in a king size sheet.
He ran to get his food supplies and fishing gear. 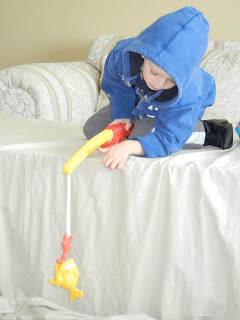 He had caught his first fish in no time.
Later, he came to shore and wanted to explore dry land.
We went out back and he sat down and unzipped his
backpack. Out came a pair of bright yellow rubbermaid gloves.
He put them on, picked up a shovel, and began
to dig for bones.
It was really fun seeing his imagination at work.
By the way, he tells me that he is a real cowboy and
that he was just pretending to be an explorer.
Posted by Grandma Shelley at 2:32 PM