Allow me to introduce you to Mr. and Mrs. Bird.
They chose to be our very close neighbors.

I'm not sure they are even speaking to one another right now.
One is probably blaming the other for
the situation they find themselves in. 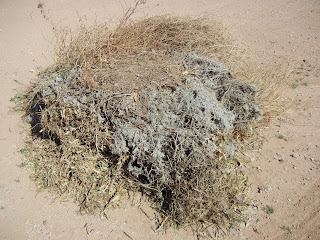 Which one found the big pile of building supplies
that papa and I had already gathered for them?
I have imagined the conversation going something like this.
Mrs. Bird: It's time to get the nursery ready.
Mr. Bird: Perfect, I just saw a big pile of building supplies. To be most efficient we should find a nesting place close by.
Mrs. Bird: I am very pregnant and it is getting hot. Can we please find a nice shady spot?
Mr. Bird flew from nearby tree to nearby tree looking for a nice shady spot. He became very frustrated when Mrs. Bird found a problem with every one of them. Mrs. Bird didn't only want shade but she also wanted to be out of the rain, security was very important to her, she wanted good neighbors, a birdbath view would be very nice, and she had always dreamed of having a nursery with dark wood accents.
Mrs. Bird: How about here? 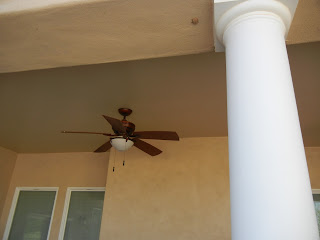 Mrs. Bird:  Location, location, location. And, it offers everything I want.
Mr. Bird grumbled but he was very tired of looking and he knew that Mrs. Bird was hot, tired of being pregnant, and she was lacking the patience and sweetness that his young bride once had.
Mr. and Mrs. Bird settled on the location and they began the work on their nursery. They had worked for hours and they had nothing to show for it. 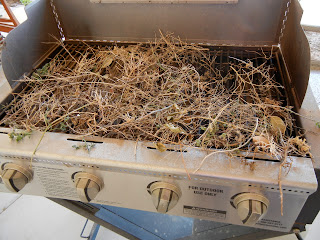 Every single twig that they placed on the fan blade
had fallen to the BBQ.
I can only imagine Mr. Bird's frustration! 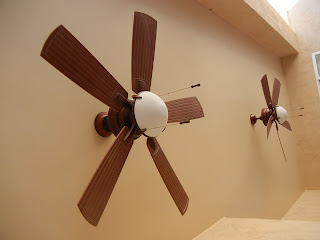 They decided to move their operation to the other fan. 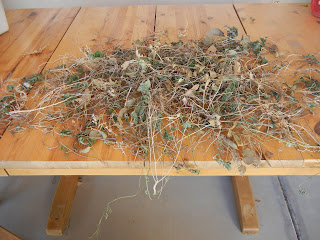 Their success despite hours of hard work did not improve. All of the twigs fell to the picnic table below.

I'm hoping that these two love birds made up during this lunch break, learned from the experience, and have been able to create the nursery of their dreams together. It would have been very nice if they had learned how their choices can effect those around them. Although flattered that we had been chosen as the good neighbors they left the work of returning all of the building supplies back to the pile for us!
Have you ever had a project that did not go as planned?
Posted by Grandma Shelley at 11:34 AM