During my Sunday afternoon nap after church my hubby had answered an unexpected knock on the door. It was our oldest granddaughter who lives down the street. He asked her if she wanted to come in and she said nope, I just want to give you these.

When I woke from my nap my hubby told me that we had received a gift and he walked me to the kitchen to see what it was. 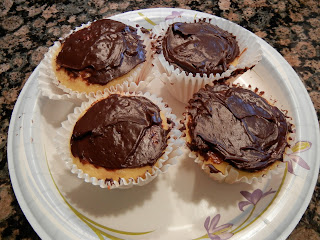 He was beaming as he told me who they were from and that she had made them all by herself. 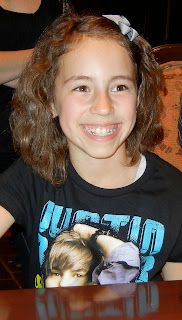 I was disappointed that I had missed the actual knock on the door. I had to immediately have one. I then called to thank her for the cupcakes. My daughter answered the phone and she had no idea that her little baker had been so kind to think of us. When my granddaughter came to the phone I thanked her for the cupcakes and I told her that they were super yummy! I also told her how her willingness to share, her kindness, her generosity, and her thoughtfulness made me feel and I thanked her for that too.
I also took the opportunity to reinforce what we had talked about in our Primary class at church that day. (Yes, I am lucky enough to be her teacher at church.) Her willingness to share, her kindness, her generosity, and her thoughtfulness to brighten another's day were all ways to show that we are true followers of Jesus Christ. She is growing up and I couldn't be more grateful for the path she is on.
Posted by Grandma Shelley at 8:34 AM