Weeks ago we  my hubby replaced a ceiling fan in our home office. The fan looked beautiful with my office decor but it had never provided enough light for our workspace for over five years now. I had tried things to put a band-aid on the real issue because I loved the fan!  I had purchased a floor lamp, still not enough light. I purchased a lamp for my hubby's desk, not the "right" light he said.

I had hand picked this fan and it was my absolute favorite fan out of the eight we  I had picked out and  we he had installed in our custom home. After the new fan was installed the old fan sat on my living room floor for probably three weeks. Not because my hubby is a slacker but because I saw a perfectly good fan sitting there that I knew had value. Because we  I didn't want to just donate it I was given the task to sell it.

I have not sold many things outside of a having few whopping garage sales. Whopping because I wait 15+ years to have another one! Running ads and having strangers come to my home makes me feel uneasy. So what to do with the fan? I've got another decade to wait before I put myself through another garage sale.

I had forgotten to take a pic before we he took the fan down. So, I  we went to Home Depot where they still sell the same exact fan and took pics of the one they have on display.  I  we also took a pic of the box for the information it offered on the fan. 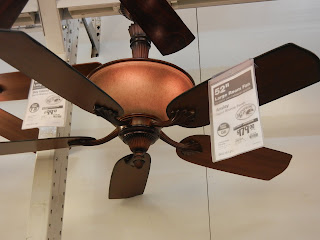 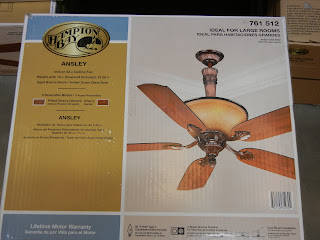 I came home and put an ad on Craigslist.
"CREEPY!"
When the potential buyers started contacting me I couldn't help but wonder if they were some kind of creep, or someone whose real intent was to come and rob me or harm me. Or would they come and give me a handful of counterfeit cash and take the fan?  I was so uneasy about it that I only posted it the one time several weeks ago. I had fulfilled my task to try to find a home for it.  I was feeling kind of relieved when I thought it was probably lost in the massive universe of Craigslist posts.
Well, I returned from out of town yesterday to dozens of new emails. Among them was  a man's name on an email that read "Do you still have the fan?" I went straight to the creepy place again picturing him as some kind of weirdo. In reality, I know a lot of really good people who purchase things off of Craigslist so  I got up the courage to reply.
The follow up reply came from a women's name. Is it really a women? What are they up to? Why are the names changing?  Creepy!  I guess I  have no business doing business on Craigslist with such paranoia on strangers. I even questioned her reason for wanting the fan. This was her story. She already owns one just like it in her family room and she loves it. She wants a matching one for another room in her home. Ya, right!  She was even willing to drive three+ hours round trip to pick it up AND give me my asking price. WAY CREEPY!
As the messages went back and forth I started feeling a bit more comfortable when she said something that seemed very "normal"to me. She said: "I am still trying to talk my husband into driving all that way to get the fan." Now the husband seemed far more sensible than creepy to me. I took my guard down a bit and because of the distance we worked out a plan. She told me to consider the fan sold at my asking price and we made a plan to  meet up in a public place in a couple of weeks when I plan to be in the area where she lives anyway. Don't worry, I won't be by myself.
So, what do I really think about doing business on Craigslist?
It's very uneasy easy cash indeed!
How do you feel about doing such business transactions?
Posted by Grandma Shelley at 12:30 AM