This year I attended # 8's preschool end of the year program. He was very pleased that his grandma was at his school to see him perform. 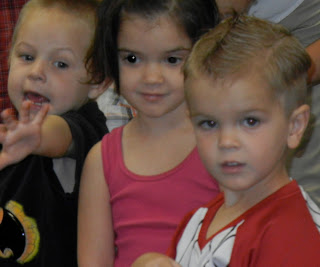 That's my cutie in the red shirt!
It was way fun watching him with his little peers. 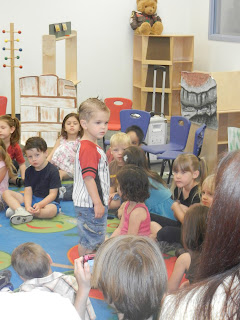 But then,  the little guy became quite strong willed on what he did and did not want to do.
If it was time to sit, he would stand. If it was time to stand, he would sit.
I heard his name called out dozens of times from the teacher, his mom, and the classroom assistants as he was being directed to follow the instructions.
His parents were embarrassed by the little rebels behavior. When he first started preschool he sat silent and followed directions perfectly. Mid year the teacher reports that the little guy came out of his shell overnight and demonstrated his "strengths". 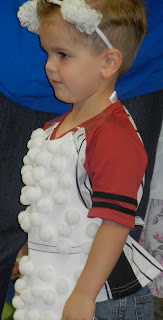 All of the children left briefly for a costume change. He came back proudly wearing his sheep costume. So cute! The little rebel immediately had a problem with the headband and he had it off. While one of the aids was adjusting his headband the picking of the cotton from his costume began. He was stretching the cotton between his fingers and before his well memorized speaking part even came up he had the entire costume tore off. His poor parents!
While searching for positives I came up with two to help encourage his parents following the performance. Preschool had certainly helped him come out of his silent shell and he still has time for another year of preschool to help him master following directions before entering kindergarten!
The little black sheep, he left the performance just glowing and very proud of himself!
Posted by Grandma Shelley at 8:26 AM