Crafting With the Birthday Girl

The kids are loving this year's itinerary. Our oldest grandson who just turned ten chose to shop in Target. When he shops with his mom and his two younger brothers it is a rule that they have to stay right with their mom with their hands in their pockets while in Target. With Papa and I we did not rush him one bit and if the toy said "try me" it was tried! He had quickly made his choice but he continued to explore the entire toy department and EVERY toy for probably another hour or so. Papa and I shared in his excitement of all of the neat gadgets. He was in heaven!

My oldest granddaughter chose a trip to the craft store for her shopping. She chose some craft supplies, and some glittery pink card stock prints that matched her bedroom perfectly. Lucky grandma.... this choice made for a birthday outing streeeeeeeeeeeetch with me! 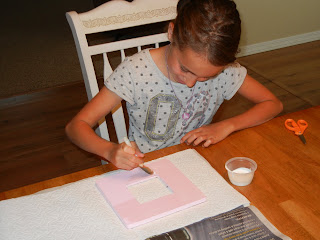 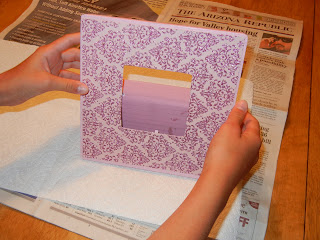 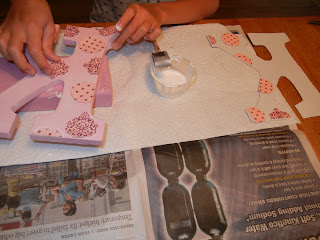 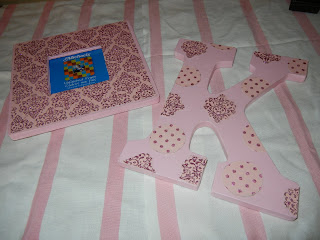 She first painted her frame and the first letter of her name in pink and allowed to dry. She then added a coat of Mod Podge to both. The frame was covered using a glittery printed card stock that matches the wall paper in her bedroom perfectly. (Thinly coat the back of the paper in mod podge and stick to frame.)
The "K" was to be covered in a coordinated glittery pink polk-a-dot. We made a mistake and the "K" card stock was cut out opposite than we needed for the printed side to come out on top. Whoops!
Plan B: We used the unusable "K" as a template and we made a design of cut outs from the leftover frame card stock and we cut circles from the left over polk-a-dot print. She laid them out on the template exactly how she wanted them on her finished "K".
One by one she added them to the painted wooden "K" using Mod Podge! Her finished crafts couldn't have been any cuter and the birthday outing streeeeeeeeeeetch was just fine with me!
All supplies were from Michael's.
Posted by Grandma Shelley at 10:49 AM