I saw this idea on Pinterest the other day and I decided to put it to the test. I was on my way out the door for a weekend at the mountain cabin when I remembered the idea. I made up a quick trial one in my kitchen. When it was time to launch I remembered that I didn't have any of the mini marshmallows on hand. Instead, I tore off a corner of a large fresh marshmallow and rolled it into a ball. I loaded it into the launcher and launched. The sticky ball of sugar flew out of it at lighting speed and has yet to be found. The test was a complete success with the exception of the missing sticky ball of ammo still being somewhere in my kitchen. 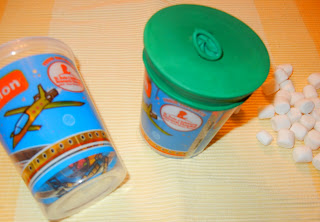 I have tweaked the idea since trying it out with the children (my focus group) at the cabin. The original idea was to use regular disposable plastic cups, a balloon, and marshmallows.
Although we did use the regular plastic cups because that is all we had we decided that a heavier duty cup would work better. The kids (and the adults) still had a great time with the launchers.
I came back home to my "test kitchen" to design a new and improved model of the marshmallow launcher. My results: A heavier cup works much better, like the kiddie drink cups you get at restaurants.
To make:
Cut the bottom out of a plastic cup, smooth any rough edges.
Tie a knot in the balloon.
Snip off the top edge of the balloon with scissors.
Stretch the open end of the balloon over the uncut end of the cup, try to center the balloon knot.
What was the top of your cup is now the bottom of your launcher.
That's it!
Load a mini marshmallow into the center of the launcher.
Find your target.
Pull back on the knot of the balloon.
and, Launch!
This is a great project for outdoor play or to use as an idea for an organized and controlled party game. Turning the kids loose with marshmallows on a hot summer day might not be so good for the black top, sidewalks, driveways, patios, and the bottoms of shoes!
Posted by Grandma Shelley at 8:18 AM