Grandkid's Rock is the theme for the 2010 Grandkid's Camp Out that is scheduled for the last of April. It is going to be everything Rock-n-Roll. I decided on the theme months ago when I found some really fun heavy card stock full size guitars that the kids can customize and "rock out" using markers and stickers for a camp craft. I found the guitars on clearance for 90% off and that is where my "Grandkid's Rock" inspiration began.

Since then I have been on the lookout for other great buys that would fit the Rock-n-Roll theme. I have been very successful in my search. I have never done camp t-shirts before but this year is going to change that. I had a low end price point for quality shirts since eight were needed this year. I really wanted the shirts to have a guitar on them and the words "rock-n-roll" or "rock star" if possible. I didn't find them all at once... but I did find them. I purchased the shirts on four different occasions and months apart!  I found perfect shirts in all of the sizes I needed. Some for big and little boys, and others for big and little girls.  My total cost for the shirts was under my twenty-five dollars budget. (so much fun!!!) 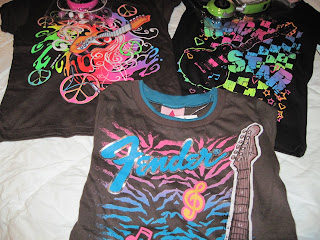 As I find and pick up things for the camp throughout the year they go into a rubbermaid tub labeled "Grandkid's Camp Out" for safe keeping until they are needed.

I came across guitar bubble holders in the WalMart party favor section. I splurged on those and paid full price at a whopping fifty cents each because they were just perfect for the occasion.

I plan to do tie-dyed pillowcases with the kids for a camp craft. Why pillowcases? Well, I think the kids will really like making them and using them after the camp. Another BIG reason is that a couple of years ago I found white pillow cases for just twenty five cents each. My rule is when I find the right number of anything (# of grandkids I have) at a great price I put my thinking cap on and come up with a project to use them. I had no idea they would end up tie-dyed but they are going to make a perfect "rocker" craft. 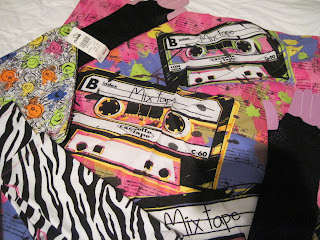 Other great finds were temporary kid tattoos that I found for 90% off. Some even say "Camp Rock"! I found some more that will work perfectly for my little rockers in the after Valentine's clearance section also at 90% off. I have tattoo's galore and all for under a dollar!

We plan to create a music video for one of our activities which will require some dress up items. I recently found some bandanas and three pairs of rock star gloves at Claires. The items were normally between four and nine dollars each. I found them on clearance for just one dollar each.

I am down to about five weeks before my little campers arrive for their "Rockin" good time with grandma and Papa. I still need to create the invites, come up with food and snack ideas, and prepare for a learning unit on the "ROCKS & minerals" of the Southwest deserts. So, stay tuned. Until then, please know that this frugal event planning grandma is busy doing something she absolutely loves doing!
Posted by Grandma Shelley at 8:36 PM