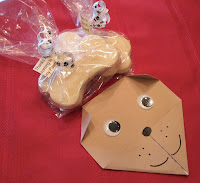 My grandson's second birthday was full of really fun and creative party ideas. The birthday boy loves doggies and his mommy went all out to make it the perfect occasion for him and his party guests.

The invitation idea is super simple and super cute. It is created by using a quarter page of construction paper. A printed invite was glued inside under the bottom flaps that create the bottom of the doggie's face. A black sticker creates the nose and holds the bottom flaps in place.

The doggie theme started at the front of the house with spotted doggie balloons tied to the entry gate. Guests were greeted with a banner that read "Kingston's Dog House". 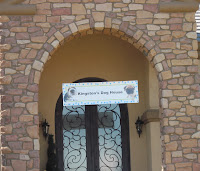 As the children arrived the party moved to the back yard. The little guests were treated to a doggie eared head band and doggie face painting. The party music was a fun mix that was all about dogs.
Party decorations included large window stickers on all of the patio windows of dogs, dog paw print table linens, table centerpieces were small buckets filled with small doggie bone candies and a bouquet of doggie shaped suckers. 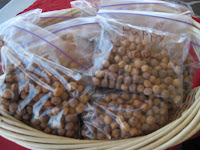 Baggies of puppy chow (coco puffs) filled a basket as table decor and then used later for a game. A doggie blowing bubble toy was also available for the kids to play with.

Two very large boxes had been cut with doggie doors and windows to look like dog houses. (The kids loved playing in those.)

Of course, the lunch menu stayed true to the party! Yummy hot dogs were grilled and served with potato salad, chips, and fresh fruit on doggy theme plates.

Party activities included lots of free time to play in the big back yard. They had a doggie bone hunt. Dozens of doggie bones were cut out of cardboard. The adults hid them around the yard and the kids hunted for them. The prize awarded for the most doggie bones found was some pretend "doggie poop"! I don't remember which lucky mommy went home with that prize in the car. 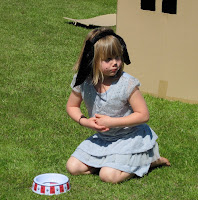 A puppy relay was a favorite activity. They had to start by jumping through a hula hoop then on all fours run the race which took them through the two cardboard doggie  houses. At the end of the course they had to eat a bowl of the "puppy chow". 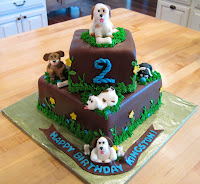 The birthday cake was adorable and perfect for the occasion. Party favors were bags filled with everything doggie for the kids.

The adults received a party favor of homemade doggie bone sugar cookies tied with a curly dog paw print ribbon with a thank you that read: "Thanks for coming to my Pawdy" 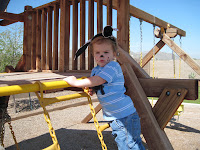 All of the little party guests had a great time playing doggie for the afternoon.


And the birthday boy.... Well he had a pretty good "dog-gone" time too! 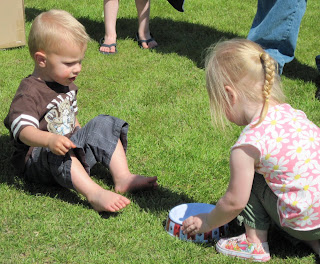 Posted by Grandma Shelley at 10:45 PM