My postings for the next week or so will be somewhat like watching the television show "24". Not the violence of course but we stayed every bit as busy as Jack Bowers at our 24 hour Grandkid's Camp Out. Although our tasks were very different from Jack Bowers they were just as important. There are many ways to build and save a nation. I believe the strength of the family unit plays a vital role in the strength of any nation. In my planning for the Grandkid Camp Outs building family unity is always my core objective. 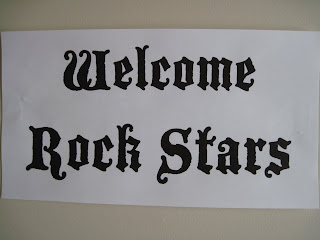 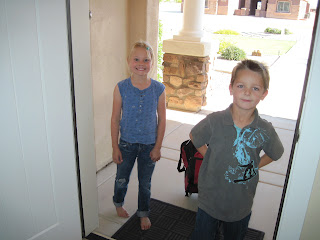 It was an exciting time when the campers began to arrive. Six of the grandkid campers live down the street and they arrived right on time pulling wagons piled high with sleeping bags, pillows, and duffle bags. It was an adorable sight! It was fun to see that they had all packed their camp out invitations in there bags too.

Each of the children were given an assigned place in the back hall to store their belongings.

I always post the camp schedule in a convenient place and at eye level for my young readers. This helps me to stay on task and the kids love to know what they can look forward to. All of my planning is top secret until they arrive for the camp. They all rush to read the schedule upon their arrival. 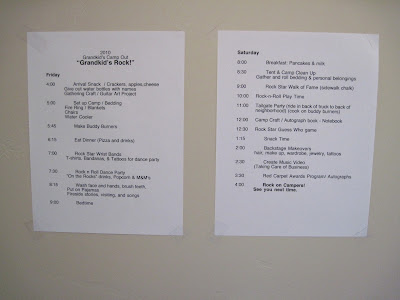 As the children arrived they checked out every square inch of  the transformation from Grandma's regular home decor to the Grandkids Rock-n-Roll decor. We worked on a gathering activity as the kids arrived. Each of the children were issued a water bottle with their name on it and charged to not lose it or damage it. We had a filled water cooler in the kitchen for easy refills. This saved a ton on cups and it also encouraged drinking in our warm climate. 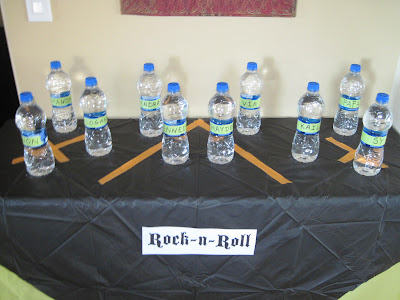 Once all eight campers arrived it was official..... Grandkid's Camp 2010 had begun! 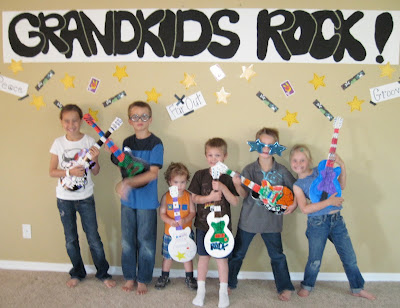 Posted by Grandma Shelley at 11:05 AM