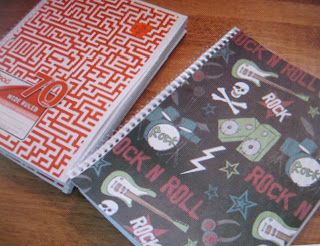 For one of our craft projects at Grandma Camp we created a rock-n-roll notebook. I had picked up the notebooks during the back to school clearance at Target for just five cents each. Out of one sheet of 12"x12" rock-n-roll scrapbook paper we created two crafts. A covered notebook and an autograph book. 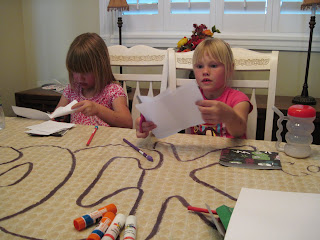 The kids cut the scrapbook paper to fit the front cover of the notebook. They then glued in down using a glue stick. This turned a boring clearance notebook into a Groovy Grandkids Rock Camp Out souvenir! 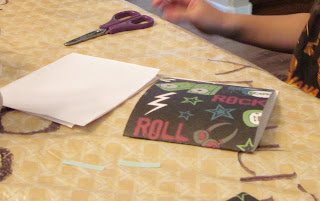 With the extra width of scrapbook paper from the notebook we created an autograph book to take to the Red Carpet Awards Ceremony later in the day so that they could get their fellow rock star's autographs! 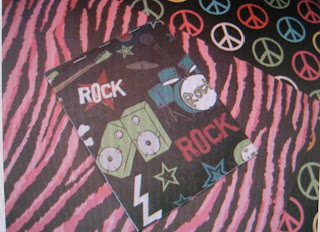 To create the autograph book we folded the cover piece in half. The kids cut out eight pages (using just 2 sheets of paper) of white paper just a bit smaller that the cover. Lay the cut to fit white paper between the front and back cover and staple it three times across the top. Cut another piece of paper the width of the book and 1" wide. (we used a contrasting paper) Fold it in half to create a binding to cover the staples at the top. Glue the top binding in place using a glue stick. There you have it....A Rock-n-Roll autograph book! I also gave the kids a new shiny pencil to go along with their new books.
Wow.... now that was.....two craft projects for less than fifty cents per camper!
Posted by Grandma Shelley at 6:07 PM