The Camp Out Schedule said "Rock Star Olympics". I had some pretty creative and elaborate games planned to go along with our camp out theme that would require a lot of effort on my part. I decided to scratch the planned olympic games and opt for something much easier so that I could have a bit of a break. I grabbed some sidewalk chalk, my bean bags, and I turned my courtyard patio into an olympic playing field for bean bag olympians. I created three different bean bag toss challenges using the chalk.

We set our spectator benches up at the end of the playing field and we had all of our olympians and their "tired grandma" sit on the benches. The rule was that everyone had to stay on the bench and be a spectator unless it was their turn to toss the bean bag. I never had a turn and I was very, very thankful to just stay in my seat! 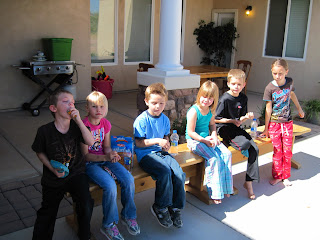 The first bean bag game was played independently with each rock star olympian tossing their bean bag and trying to land it on the highest score possible. 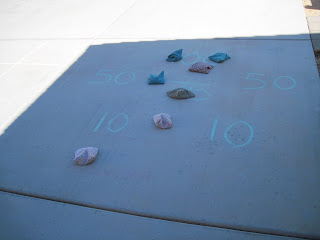 Everyone got multiple turns to play each game and they all cheered one another on.
The next game was a team game of tic tac toe. They tossed the beanbags trying to get three in a row on a very big tic tac toe game board. Sorry, no pictures of this game ..... Grandma was on a break!
The third game was a bulls eye game. Each child tossed their bean bag trying to hit the bulls eye or the outer circles of different amounts of points.
Still no pictures ......... Grandma was still on her break!
Keeping the details of planned camp activities a big secret beforehand ..... always a good idea!
Posted by Grandma Shelley at 7:59 PM