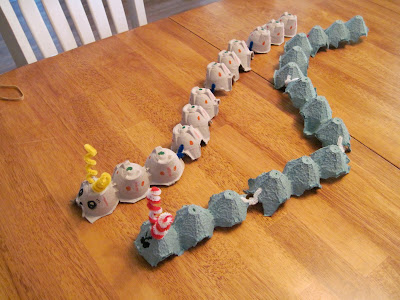 When the grands are over and want a project to do we look to the invention tub for resources.
The invention tub is a big plastic tub where I toss anything that could be recycled into some sort of invention, craft, or activity.
Egg cartons were in ample supply and the inspiration for this very familiar project.
Each of the boys cut the egg cartons into sections of three cups using kids scissors.
A skewer was used to poke a hole in the ends to connect the sections with a 3" piece of pipe cleaner.
(Wire, string, or bag twisties would also work.)
Adding in sections makes it possible for the creature to squirm in all different directions.
Markers were used to make the eyes and any other colorful markings the boys wanted to add.
Pipe cleaners, twisted around a pencil were used to create the very cute antennas.
To add the antennas, poke two more holes with the skewer on top of the creatures head. Push the straight end of the curled pipe cleaner through the hole and bend to lay flat against the egg carton, tape into place.
Since my grandsons had created the creatures their little boy imaginations went to work when it was time to play with them. This new generation of egg carton creatures had super powers, they were very aggressive, and very fast moving!
Posted by Grandma Shelley at 8:26 AM