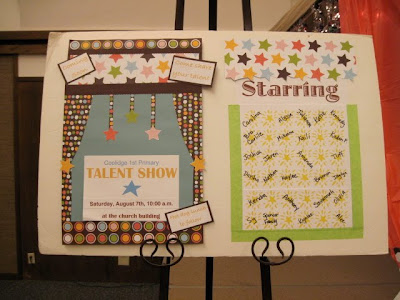 This is an activity I recently helped with for my church's children's organization. The children are ages three to twelve. The talent show has become an annual tradition and something that the children really look forward to each August.
The promotion of the activity starts a couple of months ahead of time with posters and a sign up book for those who want to participate. The posters were created so that they too could be a tradition. Each year they can be reused just by changing out the information on the center stage of the poster and by making a fresh page of stars where the children's names are written as they sign up as the stars of the show. The kids love seeing their names on the posters.
(This is something that you could do as a family, for a block party, classroom, or as friends.)
Our church building does not have a stage so I created one. The building does have sections of raised stage flooring. For last years show I had a framework of stage walls built out of wood that we anchored to the top of the raised flooring. Sadly, a couple of weeks ago when I went to check on the stage for use again this year...it had walked away from it's storage place. With little time left I had to think of a plan B.
In July I had done a Royal Gathering for our Church girls camp. I had created a castle by using a pop up canopy for my framework. So......why not a stage? 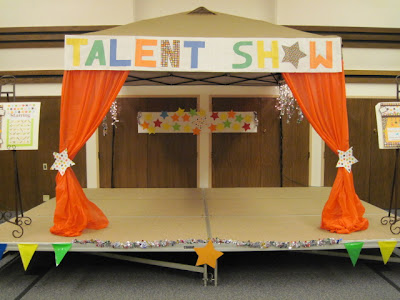 Here is the results. The new stage received roaring reviews from our little talent show stars and the audience members! 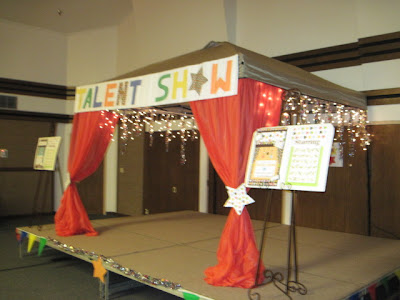 Lights and glittery garland were hung on the side to add some glitz to the occasion. I used the posters on easels as part of the decor.
As the children arrive they went to a table to register as a talent show star and to receive their place in the show.
We made up a card for each child for the MC to use to introduce each act. The information on the card included their name, age, what they were going to be doing, and a short bio on each star.
Some children who had not signed up ahead of time decided they wanted to perform once they arrived. They wanted a chance to get on that stage and that was just fine with us!
Each child performing received a "Super Star" sticker to wear that had their number of performance on it.
The children all sit on the floor in front of he stage and chairs are set up for the adults.
Anything goes for talent at this show. We had dancers, singers, pianists, guitar playing, skits, cooking demo with samples, magic, karate, hula dancer, scientific experiments, Jedi training, gymnastics, Lego display, and more.
To start the program everyone finds their seats. We then turn off all the lights (except for the stage lights) when all of the leaders turn on their flashlights to create spotlights that dash across the ceiling, walls, across the stage, and through the audience. At the same time our pianist plays a grand beginning to the show, then a booming mans voice (a very handsome MC who happens to be my hubby) says; "Ladies and Gentlemen, boys, and girls of all ages... He went on to make the beginning of the show spectacular and the biggest event and most talked about show of the year. Great job Honey!
We could hear the oooohs and awwwws in the darkness from the children. Just what we were hoping for! Once the MC completed the intro we turned the lights back on and the show began. 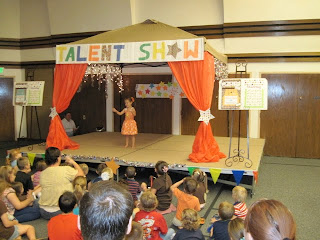 The MC introduces each child. An adorable three year old hula dancer kicked off the show. 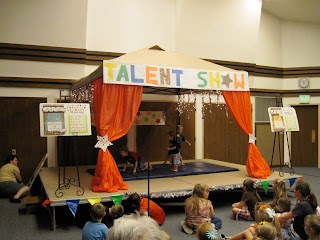 I had eight grands who performed. This is three of my grandsons doing a dance routine. The two brothers (3,7) allowed their four year old cousin to join the act at the last moment. 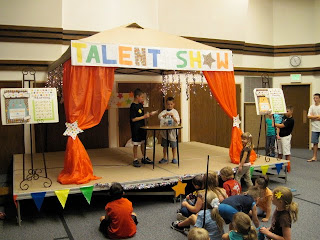 Here two of my grandsons (7,9) were doing two science experiments for the crowd. 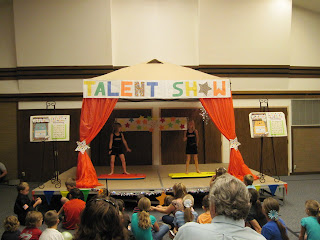 Two of my granddaughters (6,7) did a surfing dance routine to finish off the show. My eighth grandchild not pictured did not perform on stage but she (who is 10) got up early and helped me with every minute of the set up, decor, take down, and clean up. She was even there to help me unload my car when I got home.
Our 5th annual talent show was a huge success. I love seeing the children supporting and celebrating one another's talents.  It was an excellent way to spend a Saturday morning and I am so thankful that I had a part in creating the experience for all of the children. (23 acts in all)
Following the talent show the kids and their families were treated to a hot dog lunch.
The talent show is video taped by a professional videographer (my very talented son) and it will be edited and shown to the children at our next activity where the same church hall will be turned into a movie theater with concessions and all. Stay tuned....it's going to be fun too.
Posted by Grandma Shelley at 9:08 AM