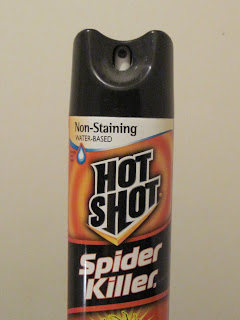 Okay, I am going to admit it. I am a big baby, a coward, and a screamer when it comes to eight legged creatures. The bigger the spider the bigger the screams. Sadly, I cannot muster the courage I need to show a brave face when I encounter a spider in the presence of my grandchildren.  So guess what? There are some who are just as afraid as I am and others who know my weakness and like to tease me.

I was in Home Depot one day and I could not believe my luck. There it was in big bold letters "Spider Killer".  It was a must have.....A killer find!

I think my fear comes from being raised in a home with raised wood floors that must have had cracks and the house was covered in ivy that wolf spiders must have loved. I swear those spiders were so big that you could hear them running down the hall. When they carry their  billion, gillion babies on their backs they are even bigger and hairier.

So, as a child and still as an adult I scan any room that I walk into for spiders. I cannot watch spiders on TV or at the movies. My little grandson's spider undies even creep me out. I can't do black spiders at Halloween and my family knows that IT IS NOT FUNNY to tease me about spiders in any way, shape, or form.

So, a couple of weeks ago when a huge spider appeared in the loft at the cabin very close to where I was going to sleep the screams and the stomping dance began. Everyone downstairs knew that I had encountered a spider just by my screams and the stomping on the ceiling above them. My husband was there to save me but he also said; "You can't act like that. There are spiders all over up here!" Just so you know that is the very wrong thing to say at the very worst time. I was going to have to turn off the lights and go to sleep up there soon. I thought he meant the actual upstairs room we were in as the "up here". He later explained that "up here" meant the entire forest! Oh, that's better. Not.

I sprayed around my bed with the spider killer and then I laid there awake for hours as the night watchman. I watched for the spiders to come out of their holes and webs. As silly as it may sound I spoke to the spiders and I told them that I was only going to be there for a short time and if they could just stay in their dark hiding places until I left that I would really appreciate it. I also sternly warned them that I did have my can of Spider Killer at my side and that I would use it if I had to!

I made it through the rest of my stay without any more spider encounters. Turns out that maybe the spiders are more afraid of me than I am of them. That's what my mom always said but, I really don't think that is possible?

My fear, big time fear, is spiders. What is your biggest fear? Have you passed that fear on to the children in your life?
Posted by Grandma Shelley at 11:52 PM

Email ThisBlogThis!Share to TwitterShare to FacebookShare to Pinterest
Labels: grandma shelley, the cabin