Those Terrible Twos and THREES? 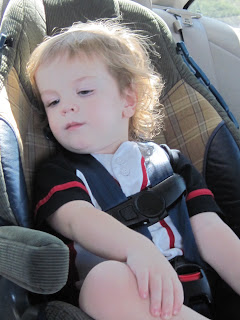 How could it possibly be?
This little one a terrible three? Look how mellow, calm, and relaxed he is. Well, that is because we made special arrangements for him to ride in grandma and Papa's car on a road trip to the cabin recently. He had the entire back seat to himself and his grandma's full attention.
We hear that he turns into a little terror when he is sandwiched in his own family car between his baby brother and his big brother who is six. With the two car seats and big brother sitting in a booster seat it is pretty cramped quarters and this little mellow fellow's attitude and behavior is anything but calm and relaxed. 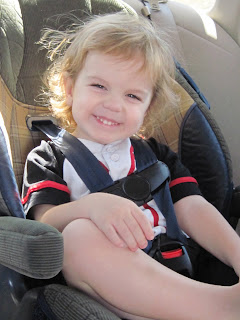 We played games, we sang songs, and we talked about the scenery and the big trucks, trailers, and cars that we saw on the road. There was not a single whimper or a whine. All smiles.
When we had escaped the hot desert floor Papa rolled down his own window to feel the coolness of the breeze. Our grandson wanted his window down too so that he could check it out just like his Papa. 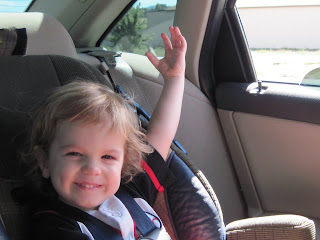 The nearly three hour car ride had been absolutely enjoyable. We had to stop and do some grocery shopping before we finished the last leg of our road trip.  Potty training was in progress and he was in a Pull Up for the ride. The potty training  had been a complete success so far while in our charge.
I had Papa take him into the public restroom while I did the shopping. The little guy didn't want anything to do with it. This was his first public restroom experience. It had been quite some time since he had used the restroom and I was fearing an accident when Papa returned defeated.
Minutes later as I was getting ready to check out he tells his Papa that he needs to use the restroom. So, off they went again. At home he was being rewarded with m&m's when he succeeded on the potty.
So, since I am grandma and this was a huge milestone to use a public restroom the reward needed to fit the magnitude of the moment. An entire bag of m&m's it is! 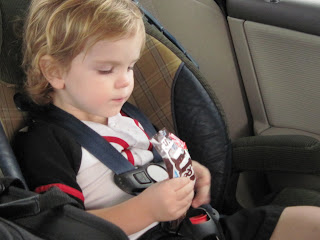 He was one happy little boy!
UNTIL.... he was reunited with big brother. 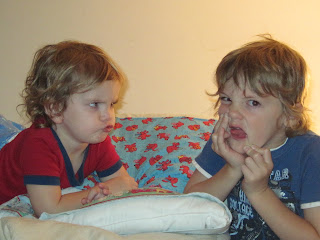 Isn't it amazing how our little twos and threes
can turn the terrible off and on!
Posted by Grandma Shelley at 8:27 AM