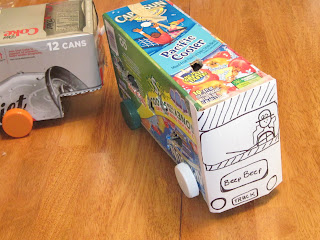 Little brother discovered the fun of the invention box while his two big brothers were away at school. He was able to get first pick among the treasures in the box. The invention box is a big tub where I throw all kinds of odds and ends and items that others may consider trash.
The invention box has provided hours and hours of free creative and inspired play for my grandchildren.
On this day my four year old grandson found a Capri Sun box and a twelve pack coke carton that inspired the idea of a truck and trailer rig.
We discussed what we needed to do and he had the assignment to go dig through the invention box to find the eight "wheels" which I kept calling tires, and he kept correcting me that they were wheels.
All bottle caps are thrown into the invention box! They have been used for wheels, "tires", dials for all sorts of things, eyes, and more. 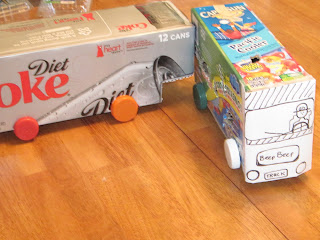 A pipe cleaner was used to create the hitch between the truck and the trailer. Not pictured is a ATV Ranger that was created out of a berry box. It is being hauled inside the trailer.
While I was cleaning up from the project I overheard him playing with the new rig. He was ordering some imaginary workers to load er' up.
"Okay, load up the guns!" "
"Load up lot's of dirt."
"Load the bullets!"
"Load up the shovels!"
"Load up the weeds!"
Although a bit troubled about the need of guns. bullets, dirt, and shovels I was most curious on why he needed weeds.
I asked why do you need weeds? He put his hands on his hips and with a (what a dumb question attitude and smirk) he said; "Uh.... Grandma, I'm going to be growing a garden!"
(I'm sure this has no reflection on his family's summer garden.) 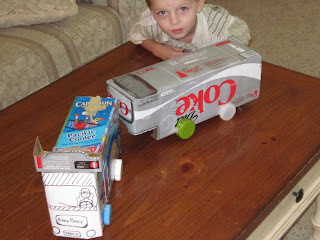 Posted by Grandma Shelley at 8:23 AM

Email ThisBlogThis!Share to TwitterShare to FacebookShare to Pinterest
Labels: crafts, simple things, You gotta love it