Hitting Too Close to Home

In late summer there were two different incidences where two year old boys were lost. One wondered from his home while his mother was napping and the other disappeared from a tent during the night while the family was camping.

I know the boy who wondered from his home was found dead in a swampy area near his home within a couple of days. The other I don't remember if or how that one ended. I only know that it had been days and days since the boy had been seen and he was presumed dead. In both cases massive search and rescue teams were organized to find the boys.

One may wonder how a little two year old could get lost. These stories, both from Northern Arizona were fresh on our minds as a family when we went on a recent camping trip to Northern Arizona.

We sat up camp and the kids were all playing. We had seven little ones with two of them being two and three years old. There were eight adults. We were all visiting as the kids played nearby.

The two and three year old cousins had been at one another's side since arriving. They had been playing right behind the travel trailer within a few feet of the adults. At one point the mother of the three year old noticed the boys had moved. Quickly scanning the area she realized they were nowhere in sight.

The adults fanned out to create our own search and rescue. One adult gathered the remaining children and kept them close. I grabbed the baby so that his parents could go look for his big brother.

It is amazing how many thoughts go through your head during a time like that. Figuring how many hours of daylight was left, wild animals that could be in the area, possible cliffs, pools of water, stranger danger, when to call for help, and worse! Every moment seems like an eternity. I know that we each had a prayer in our heart. Just beyond the camp site was thick forest. The father of the two year old without hesitation headed for the road (a dirt and primitive road).  Others followed with some length between each one and others entered the forest looking and calling out the boy's names.

The father was wise to take the road and I am sure inspired to take the direction that he did.  He walked quickly while keeping his eyes searching for any movement in the forest. He spotted the two little guys more than 1/2 mile away. The boys were just fine and having a great time. We were so thankful that they were still together. They had no idea why their mother's were crying or why they were being held so tight and showered in kisses.

We were all very grateful for our happy ending. Each of the children in our group received a stern reminder of the camping rules. No one was allowed to go into the trees without an adult. 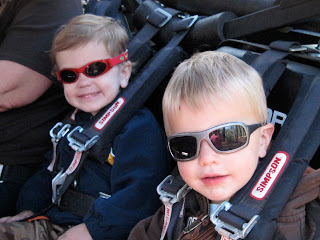 Everyone was watched extra closely as they
will all be forever more.
The adults learned a big lesson too.
We know it only takes a few seconds around water
and we learned it only takes a few seconds
in the thick woods to lose sight of our little ones.
Our favorite place for these two wanderers was
to have them tightly shoulder strapped into the Ranger.
They went on every single ride in the six seater ATV
that ran most of the day. 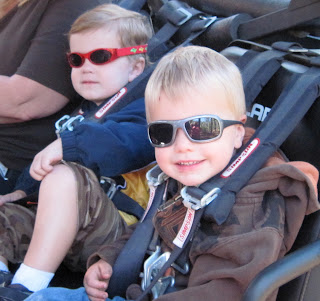 They had no idea why they were so lucky!
The remainder of our time was without incident. 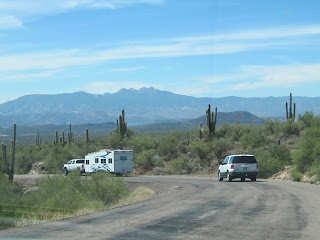 As we headed home I thought of those families
who had lost their little ones and realized just how
quickly it can happen to responsible parents.
My heart was filled with gratitude as I watched my grown children
and their families heading home united and safe. 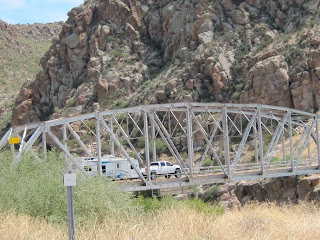 Our trip had a happy ending and important lessons
were learned by both the young and the old.
And our love for our precious little ones
was magnified beyond words!
Posted by Grandma Shelley at 6:53 PM