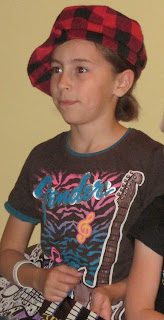 It was Bieber Fever this weekend for Papa and I with our oldest granddaughter.

We had the honor of taking our granddaughter to go see the movie Never Say Never. It must be a grandma thing but I watched her loving every second of the movie more than I watched the movie myself.

She held it together while we were in the theater but on the way home it was all about Justin Bieber. She is down, down, down with the fever!

She had two things on her mind on the way home. One was from the message that she had gotten from the movie to follow your dreams and to never give up. She was committed to practice and practice her dancing and to post her original dance routines on You Tube in hopes of being discovered. The second was to get herself to a Justin Bieber Concert.

She counted her money on the way home. The $42 she had in her bag was promised to Justin Bieber tickets!  She was also dropping some BIG hints that her birthday is right around the corner.

The movie portrayed Justin Bieber and his camp as really good people who want the best for him. Justin is very close to his divorced parents and his grandparents. They seem to be a very prayerful and grateful bunch. Our granddaughter recognized all of these things and then wondered out loud if he would stay the same good person that he is as he gets older. She threw out a few names of those young artists who have lost their moral compasses to the things of the world and spiraled out of control as they got older and more successful.

Justin's grandfather had said in the movie that he hopes that Justin will always remember the values and the truths that his parents and grandparents have taught him. Who knew that going to see Never Say Never would open up such a special and timely teaching moment with our almost eleven year old granddaughter.
Posted by Grandma Shelley at 12:14 AM