You Gotta' Love It!

A Day with Grandma 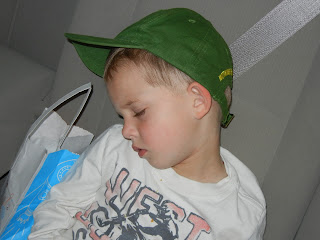 I had some great little conversations during some
one on one time with my four year old grandson.
These were some of my favorites.
Grandma, do real cowboys change their clothes?
Sure they do.
Cause my brother tells me that I'm not a real cowboy when I put on clean clothes.
For his mommies sake I told him that he is for sure a real cowboy!

He was playing with a Capri Sun straw in his mouth and he asked me what I thought he was pretending it was.
Is it a thermometer?
Why would I put a thermometer in my mouth? A thermometer is what the doctors use to clean flies out of your ears.

We were heading out to lunch and he wanted a corn dog. I asked; " Do you dip your corn dog in ketchup?"  He said; "No, I double dip it!"

He got a squirt gun fire extinguisher in his kids meal at lunch. He then told me that his firemen's hat had gotten broken. I had seen some fireman hats in the dollar store and I asked him if he would like to go get one. He reluctantly said; "Ya, but I don't have a dollar." My heart melted as he lit up when I said that I had a dollar.

We had a ton of fun in the dollar store. He was chattering all of the way home when suddenly he went silent. 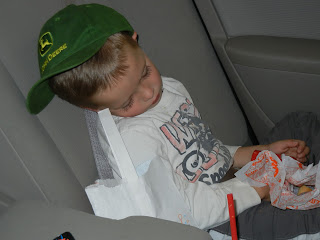 I'm doing okay if he was worn out before me!
Posted by Grandma Shelley at 10:37 PM