Papa and I cooked up a really awesome way to hand deliver the Top Secret Invites for this years grandma camp. Our idea needed some resources that we did not have. I put on my creative and frugal thinking cap and I fixed us up in no time.

Papa needed a black tie. He has dozens of neckties but not a single black one in the bunch. I remembered that we had a bag of his discarded neckties in the garage for charity. I didn't have a black necktie but I did have a can of black spray paint! 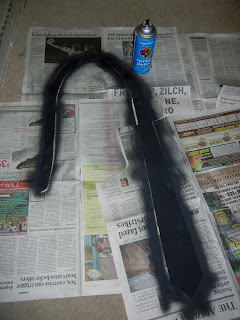 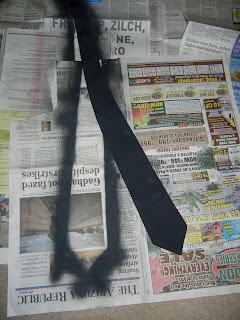 In just minutes
Mission Accomplished!
Next we needed an official badge.
I have a dozen of these babies that I picked
up for free at a home show of all places. 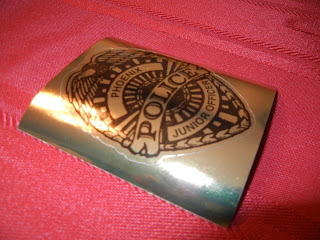 I set up my underground lab. 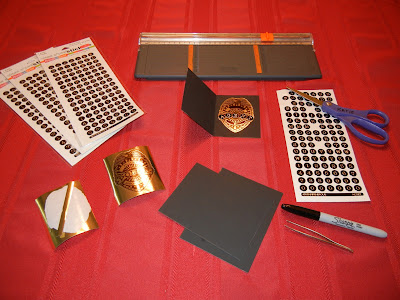 Scraps of black poster board, scissors, paper cutter,
black sharpie, tweezers, and alphabet stickers.
I blacked out the writing on
the sticker badge with a black sharpie.
I made a pocket size booklet using the poster board.
Using the tweezers I placed the word
AGENT
on the badge.
I stuck the sticker to the inside of the booklet. 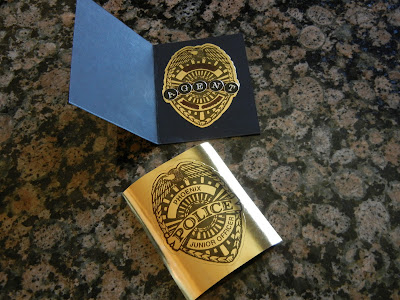 There you have it.
The before and after shots!
By the way,  I found the letter stickers for
just .49 in Michaels. Watch those clearance bins!
They had been marked down from $2.99.
I am so glad that I had them on hand.
We found a fedora hat in WalMart for $10.
Are you ready to see what
we came up with? 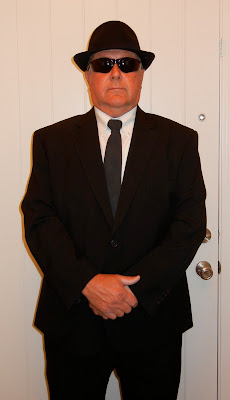 How cool is he? 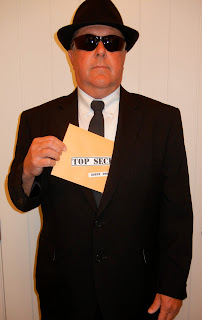 We called ahead so the parents knew that we were coming.
One of the families did not know because they were unable
to answer their phone. Their reaction will be another post.
I hid out of sight.
When the door opened my hubby pulled
out his badge and identified himself
as a special senior agent.
He then pulled the top secret envelopes from
the inside of his coat and he gave one to each child.
His presentation was perfect.
The parents had no idea what we had planned.
I think they enjoyed it as much as the kids did!
I added something else to our visit when
I stepped from the shadows but,
I will save that for another post.
This secret stuff is so much fun!
Posted by Grandma Shelley at 12:14 AM