I Heart You Too! 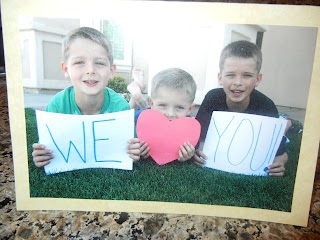 Mother's Day started out with my husband and I alone in our very quiet empty nest. He made me breakfast and as we were sitting at the dining room table eating my eyes filled with tears.  I was having an "empty nester moment". For that moment I was missing the days of raising my young family. It had always been a tradition for my children to make me breakfast on Mother's Day. My husband asked me what was wrong and I was so choked up I couldn't even speak. It was a whopper of an "empty nester moment."

After breakfast it was time to get ready to go to church. Once we were at church my sad feeling began to fade away. My adult children and their families were arriving and filling the pews. A gift that fills my heart with gratitude each and every Sunday. I now had three of my adult children, three in-law kids, and ten grandchildren within my sights. My youngest granddaughter spotted me and she came over and gave me the biggest hug ever.  It was exactly what I needed.

Soon, I had eight of my ten grands up front performing a Mother's Day Song with the rest of the children in our congregation. More tears filled my eyes but now they were tears of gratitude for the little ones that call me grandma.

The day only got better after that. The amazing men in our family had planned Mother's Day dinner. Grilled chicken, twice baked potatoes, salad, garlic bread, and pazookies for dessert. It was all very yummy and there was plenty of children's voices in the house now. The formal dining room table in my daughter's home was filled with laughter and conversation as we shared the meal with our adult children and in law kids. I was feeling like a very blessed mother. My youngest daughter was unable to be with us and she was missed by us all!

After dinner I noticed a card on the kitchen counter that was tied with a bow. 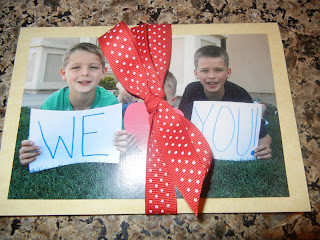 I thought it was super cute and I snapped a picture of it.
A few minutes later I told my oldest grandson how nice the card was that he and his brothers had made for his mom. His reaction was very strange like he didn't know what to say. Within moments I learned why.
My children showered me with gifts and beautiful cards. The card above was made for "ME"! I realized my grandson was wondering how I knew about their surprise and he was probably really wondering why I thought it was for his mom!
My son who is a professional web developer and designer gave me a laminator and lots of laminating materials. He had recently done some design work for me for my grandma camp. He reported that when I said I was going to laminate the project (that he had spent an hour designing)  with clear packing tape..... he silently got sick to his stomach! So, thanks to my son and his family, my future laminating projects here on grandma's little pearls will not include clear packing tape especially on those things that are professionally created for me!
It ended up being a really nice day. It began with tears of sadness and it ended with tears of gratitude and deep love for my amazing adult children, their spouses, and the ten little pearls they have blessed me with.
Posted by Grandma Shelley at 9:46 AM

Email ThisBlogThis!Share to TwitterShare to FacebookShare to Pinterest
Labels: grandma shelley, my family