What would a top secret grandma camp be without a stake out for her secret agents. It is a tradition that we sleep outdoors in a tent at the camp out. When it was time for bed everyone climbed into the tent and got into their sleeping bags. That is, everyone but Papa. I told the kids that he was taking a shower.

Wouldn't you know it..... When we were all settled in for the night we received a highly classified delivery.  This was not just going to be a sleepover for the agents, it was going to be a stake out! We received word that a fugitive had been seen in the area and we were needed to help catch him. We were given information that would lead us to the bad guy.

The tent turned silent as I read the details.

1. This individual was wanted for a crime spree of helping himself to goodies and treats across the globe.

3. This guy had a real sweet tooth. In fact, he only ate sweets.

4. It was also known that he never brushed his teeth and that he had a mouth full of rotten teeth.

5. He had an imaginary friend that he talked to.

6. He littered the ground with his wrappers and his extra goodies.

6. He liked to brag about all of the goodies he had taken.

As soon as we finished reading the information we heard something outside our tent. It sounded like candy being unwrapped. Then we heard it. A really weird voice talking about the goodies he was eating. He started bragging about all of the donuts he had taken recently. He even said; "I don't like kids!" and how he loves to take the goodies out of their lunch boxes and eat them himself. We sat silent in the tent listening for the clues.

As soon as we thought he was gone two of the kids quietly unzipped the tent and peeked outside. 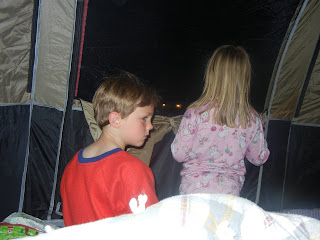 Our lookouts said that it appeared that he was gone so we decided to go out and look for evidence. We took our flashlights. Sure enough there was candy wrappers all over the ground, unwanted goodies thrown down, and cookie crumbs on the sidewalk. The trail of litter and goodies led us to chocolate footsteps in the driveway.

When we were trying to figure out what size of shoes those footsteps were from Papa came out of the house to see what was going on. They all started telling him what had happened.  Once he had everyone's attention Papa smiled at them and guess what? His mouth was full of rotten teeth. All of the kids screamed and ran.

The parents report that the stake out was the highlight of the camp out and the words "I don't like kids!" are going to be long remembered.
Posted by Grandma Shelley at 11:59 PM