End of the School Year Awards

I have been to my share of end of the year awards programs having raised four children and from being the grandma to eight school age grands. Today's college award ceremony was especially rewarding for me as a mother of an adult child. My daughter who is the mother of three very active boys, a very supportive wife, a beautiful person inside and out and a women who runs circles around most added college courses to her very busy schedule this past year.

She was awarded with the Top Communications Award today. The professor that presented the award spoke very highly of my daughter. Much of her comments were things that I already knew about my daughter but it was very nice to hear her college family recognizing her talents, skills, and her amazing academic abilities. 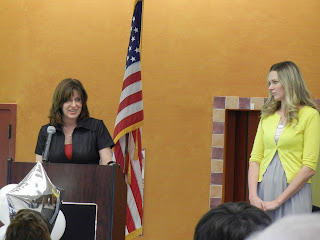 My daughter took her classes online so her professors and classmates had never met her face to face. The impact she made on the other online students and on her professors through her work and through her communication with them on the online discussion boards was summed up by the presenter today as though she knew my daughter's character very well.

As her mother this spoke volumes to me to the person my daughter is to her very core. While they knew she was a mother they have no idea on the very regular and special things she does for her many friends, her family members, her children, to cheer the elderly, her children's schools, her community, as an online marketing consultant, and in her demanding church responsibilities to assist in the running of a women's organization and in organizing and running a summer camp for 200+ teenage girls.

What I found most rewarding was the confirmation from the outside world that my daughter has grown up to not only be a contributing member of society who is goal minded, willing to work hard, sacrifice to achieve, and endure to reach her goals, but to that of her unwavering goodness despite the circumstances.  Though unseen by her classmates and professors they knew her well by the way my daughter represented herself through her online contributions. The professor said she was encouraging to others, thought provoking, and that she presented well written discussion comments and class assignments.

It is an absolute blessing to know that she knows who she is, how she wants to live her life, and the impact she desires to have on this world one child, one friend, one volunteer opportunity, one client, one women, one family member, one neighbor, one church member, on teenage girl, and one student and professor at a time.

To top it all off today was her birthday! She and her family have been going through a very tough time but despite the trials they are facing on so many levels she just keeps moving forward faithful on being the best she can be. Today was a wonderful break from all of that. We were lucky enough to take she and her husband out for a birthday lunch before the awards ceremony. And the award ceremony.... it was both very well deserved and a much needed bright spot for a very dear, admired, and loved daughter and her parents who couldn't be more proud of the woman she is!


Posted by Grandma Shelley at 7:57 PM