We recently took three of our grandsons on an eight day outing to our  mountain cabin. I had activities scheduled for each day of our get-away. The boys knew the things I had planned and they looked forward to the special outing for the day. Some of the outings were in the middle of the day and others were in the evening. There was just one that was scheduled for an early morning departure. The early morning outing was especially looked forward to by the boys as it was on our schedule as a "Donut and Milk Picnic Breakfast"!

The plan was to get up early and pack up our ice chest with ice cold milk and our picnic basket with napkins and cups before heading down the mountain to the bakery in town.

Once at the bakery each boy carefully picked out two donuts. As soon as I saw the gummy worm topped donut I knew there would be no way that all three little boys could possibly pass on that sweet gem. Yep, it was the first choice in the donut box although his choices had been sternly pre-determined to be two chocolate long johns. The pile of gummy worms were just too tempting I guess. 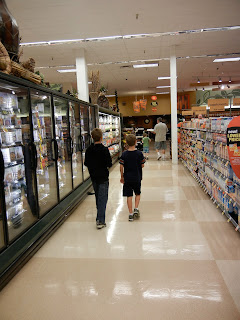 Once the donuts were purchased we had a short drive to a school playground that was open for summer play. We found a nice shady spot near the playground for our picnic. 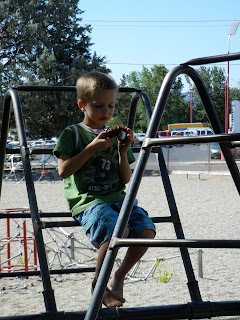 The school had special meaning to the boys. Their great-grandpa worked on building the school some fifty plus years ago when I was just a young girl. As the boys played on some very old playground equipment (which they thought was very cool by the way) I noticed lots of horn honking at a nearby intersection and along the street we were on. I was very surprised with it being such a small town until I realized that just maybe that is how the locals say hello to one another.  practice driving test   I was feeling nostalgic hanging out at the old school and watching my grands play on the same kind of playground equipment that I did as a girl so my vision of small town honks of friendship just added to the beauty of the day. 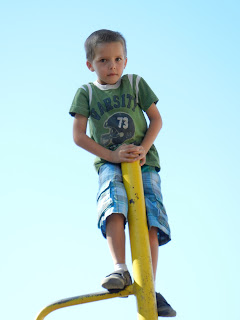 It was a great little activity and a highlight of our week for the boys. The boys enjoyed unlimited play, the high sugar breakfast was quickly burned off with lots of running, jumping, and climbing and naughty grandma still had two more meals to square out their nutrition for the day.


Posted by Grandma Shelley at 5:28 PM