In July I had a special assignment to create a royal gathering for a summer camp of 200+ teenage girls. It was so much fun to re-create it on a much smaller scale recently for a group of girls ages eight to eleven and their mothers.

This idea could be used for any kind of royal theme party for both boys and girls. Royalty does of kings, princes, and knights too!

The theme of the event was Daughter of a Heavenly King. Having my ten year old granddaughter and my eleven year old grand niece helping me do the two hour set up was very helpful. I loved that they were learning the ins and outs of putting on an event by working along my side.

Using an outdoor pop up canopy I created a castle themed room for our serving tables. 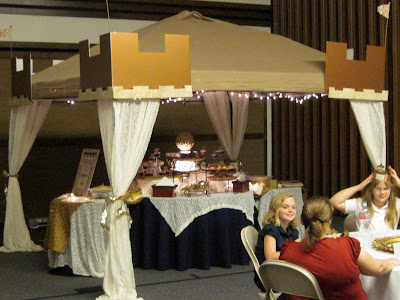 The girl's eyes lit up as they walked into the room.
Each of the girls and their mothers signed the royal guest book
that was at one end of the serving table. 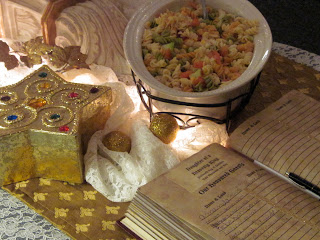 Each honored guest made up a name of a Land
in which they were visiting from and wrote it in the book.
Each of the tables had gold jeweled crowns for the girls to wear.
(They were card stock crowns from the dollar store that I had spray painted gold and I hot glued a large jewel on the front  just above a tag with the theme of the event. The jewels were from a bag of party favor rings. I just cut off the jewel.... they were bigger and far less expensive than anything I could find in the craft stores. And, they were just perfect!)
The crowns also served as the table centerpieces. 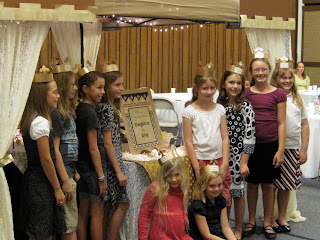 Lunch was chicken salad on a roll and dainty
peanut butter and jelly sandwiches. 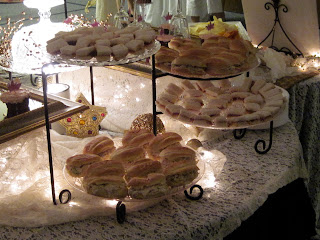 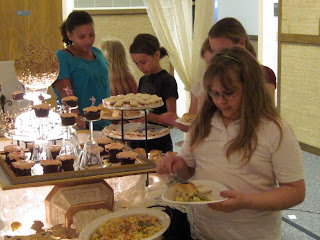 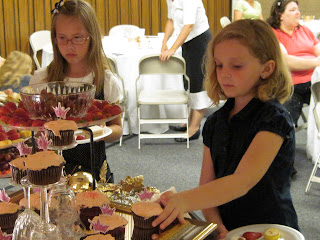 Cupcakes with a pink crown pick! 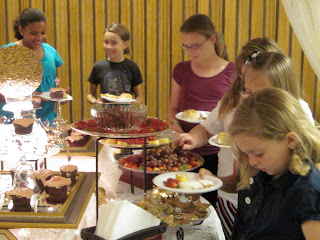 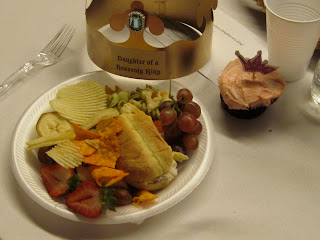 The rest of the program was put on by the girls leaders.
It included making a charm bracelet that charms can be added to
as the girls reach the goals of their program.
On this day they and their mothers each received a "Crown" charm.
Knocking down my royal set up went far quicker than it went up.
I had many little willing and able hands wanting to help.
The girls wanted to know if we could do it again
real soon!
Posted by Grandma Shelley at 4:04 PM