I have always had an invention box where I  throw all kinds of odds and ends for my grands to use as resources for inventions. It is a loved tradition when my grandsons come over.

One evening we were expecting three of our grandsons while their parents attended a meeting. A light came on in my head for a new and improved invention experience. Why, you may ask? Well, while invention crafts are an absolute keeper they tend to create a big mess while everyone's creative minds are hard at work.

So, on this night I decided to set up an eight foot folding table, folding chairs, and work lamp in the toy room. I took all of the supplies needed for a really great Invention Lab and set them out on some shelves.

A variety of tapes, strings, wires, pipe cleaners, colored papers, card stock, scissors, glues, a skewer (it always seems to be needed for poking holes), an adult supervised hot glue gun, and the overflowing invention box of odds and ends filled the shelves.

When the boys arrived we announced that we had created an Invention Lab and they LOVED the idea. 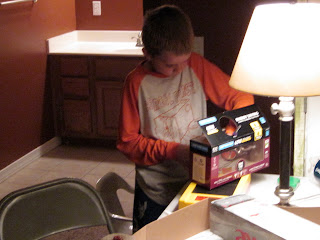 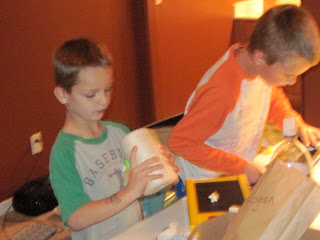 Being in the lab added a whole new layer of excitement! 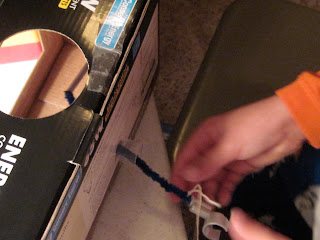 Creating a pulley to run an arm than comes out
of a garbage truck to pick up trash.
(It worked!)
After being in the lab for about an hour Papa stayed
with the boys and I went and grabbed some snacks for the boys.
I bagged up some popcorn with M&M's and Capri Suns.
My powers of new and improved ideas were on fire this night! 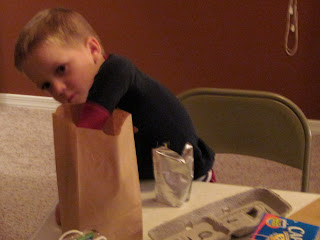 An entire evening of creative fun and snacks.
And...... all confined to one room!
The youngest invented an airplane. 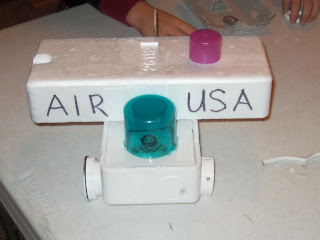 In fact, he invented a whole slew of things. 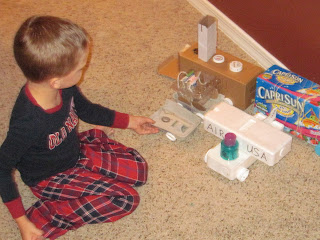 It was a great evening of watching their little minds tick.
As you see, they came in their pajamas because it was
going to be a late night for them.
When mommy and daddy returned it was bedtime.
And something else that was pretty great....
I could close the Invention Lab door and go to bed too!
Posted by Grandma Shelley at 8:48 AM